F1 2015 starts its engines on PC and consoles this June 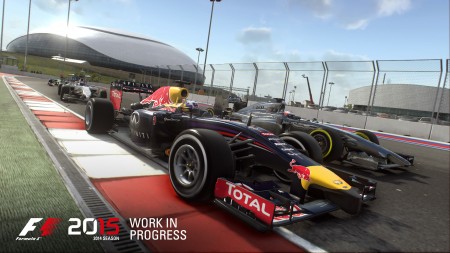 The 2015 edition of Codemasters’ racing franchise is indeed ready for the checkered flag as 2015 Fia Formula One World Championship is on the way for this June. Distributed by Bandai Namco, the latest F1 experience is powered by the EGO game engine and should be the most realistic and best looking title in the series yet. And that’s not to mention the all-new physics, which promises improvements in over 20 different areas “including engine and transmission, aerodynamics, fuel tank, force feedback, suspension and most notably a brand new tire physics model”.

The game is also set to showcase a new ‘broadcast presentation’ style, which Codemasters hopes will recreate a TV broadcast feel and presentation. To that end, you can expect podium and grid sequences as well as some interesting Kinect and PlayStation Camera (or headset) integration where gamers will be able to vocally connect with their ‘race engineer’.

So if you’re an F1 aficionado, this looks like it’s going to be one not to be missed. 2015 Fia Formula One World Championship hits the Xbox One, PS4, and PC this June from Bandai Namco and Codemasters.

Jason's been knee deep in videogames since he was but a lad. Cutting his teeth on the pixely glory that was the Atari 2600, he's been hack'n'slashing and shoot'em'uping ever since. Mainly an FPS and action guy, Jason enjoys the occasional well crafted title from every genre.
@jason_tas
Previous Get reacquainted with team Shaolin in Mortal Kombat X
Next Rockstar lets loose a new series of Grand Theft Auto V screens