Home / News / Kirby and the Rainbow Curse (Wii U) Review

Kirby and the Rainbow Curse (Wii U) Review

Nintendo’s blobbiest mascot returns for a claymation adventure that follows up on the 3DS’ Kirby and the Canvas Curse.

For this review, I’m just going to assume that you haven’t played Canvas Curse on the 3DS, as gameplay is pretty much the same as that title. The only difference being that you have the GamePad to draw on instead of the 3DS’ second screen. Oh, and the big TV sitting in front of you that you can look up at if you like… though that might not be the best idea if you actually want to get anywhere (but more on that in a second).

We’re just going to skip on by the story, since this is a typical Nintendo game in that it’s almost completely inconsequential, so starting things off here (in paragraph #2), I have to mention the absolutely amazing graphics of Rainbow Curse. This is a stunner of a game that looks like a claymation film gone wild and splashed with as much color as you could imagine. Seriously, I know the Wii U isn’t the most technologically advanced thing in the world, but it can pump out some sweet visuals when it has to and man does it do it here.

And when I say ‘claymation’ by the way, I’m not speaking in generalities. The graphics are moulded to look like everything is made of clay. In the same way that everything in Kirby’s Epic Yarn was made to look like fabric, everything here is made to look like someone sculpted it out of colorful clay. It’s a beautiful look (not that you probably haven’t figured that out by now) and one that I hope and pray that Nintendo uses again, maybe for something with a little bit more of a traditional control scheme. Why you ask? Well, I’m getting to that. 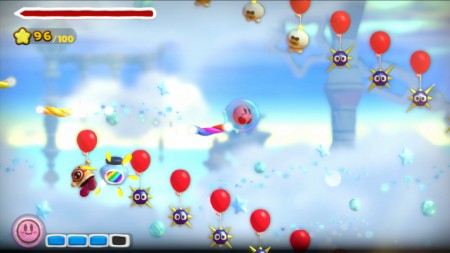 But first let’s talk about the second half of the A/V package; the audio. One of the lowest points of Rainbow Curse, the music is only tolerable here. I’m not really used to this from a Nintendo game, as the usually poppy soundtracks are generally pretty darn catchy, but the tunes present in this visual stunner are only ‘okay’. I doubt you’ll remember any of it after you finish your play through and you definitely won’t be humming it as you go about your day. The OST is just kind of there honestly. As for the sound effects, they okay as well, but it’s the vocal work that was the major offender to me.

I have a real problem with the way that vocals are done sometimes in Nintendo-branded games. When they’re done, I should say. Occasionally their style works, like when you have a cartoony character like Mario who makes little grunts and cute little noises here and there, and maybe saying a few key phrases. For me though, Kirby’s voice is so grating that I just can’t stand it. It’s almost… too cute. But thankfully he doesn’t do much vocalizing and, since plenty of people seem to have no issue with it, I won’t really dock any points for it.

And now that all that’s out of the way, let’s talk gameplay.

The gameplay here consists of you drawing lines, which serve as tracks, across the GamePad’s screen for Kirby to roll on. See, this isn’t a typical platformer in any way and you don’t control your character by hitting buttons and jamming on the d-pad. And you can forget Kirby’s power of adapting an enemy’s abilities as his own, because he doesn’t do that here (why? Who knows?). Instead, the entire game plays out with you drawing, even in some themed levels where Kirby transforms into a rocket, a submarine, or a tank.

These levels are actually lots of fun, and really serve to break up the style of the rest of the game, so they do come off was a little bit different than the standard stages that Rainbow Curse throws at you. The little pink guy (?) can even shoot rockets in some of these modes, and occasionally I wished the levels were longer because they were so much fun. But that’s not to say that the rest of the game isn’t a good time.

I couldn’t actually believe how much fun it was. When I found out that Rainbow Curse was going to follow up on Canvas Curse, I wasn’t exactly enthused as I was one of the few that didn’t care for the 3DS game. For some reason, I liked this a heck of a lot more though.

Tapping Kirby gets him rolling (Why? Again, who knows?), while drawing a rainbow rope under him gets him climbing along it. It’s fairly tough to run out of ‘paint’, but when you do you cannot draw for a few seconds, so you will want to let Kirby rest on the ground and just roll from time to time. Occasionally there are times when you can’t do that though, and those are some of the trickiest portions of the game to navigate.

Though Kirby and the Rainbow Curse is actually not an overly difficult affair, it will stretch your quickdraw capabilities from time to time and the boss battles in particular are tough to brutal. That’s a good thing though, because most of this adventure is actually pretty easy, so when you get up against a challenge it feels a little extra-nice when you beat it. Unfortunately, some of the challenge presented here comes in the form of the controls themselves.

At times, I thought the stylus was fighting me a little too much, or that maybe Kirby had decided he didn’t feel like playing anymore. It’s not consistent, which is odd, but the stylus feels somehow imprecise. True, I haven’t really used it in any game on my Wii U other that Kirby so I have nothing to compare it to, but I get the sense that the GamePad doesn’t register taps and scribbles as well as it should. It’s honestly not game-breaking, it’s not that big of an issue and you can play around it, it’s just that you really shouldn’t have to.

As for additional modes of play or collectibles, Rainbow Curse has a decent amount of the latter and not too much of the former. The collectibles though aren’t all that captivating since they really have no effect on gameplay- and it’s not like you can get an achievement or trophy for getting them all, this is a Nintendo game remember?

There is one last thing that I do have to talk about, and it’s what I alluded to at the start of this review- it’s about the duality of the GamePad and your in-home TV. I’m not going to go too deep here, since it’s not  really an issue that you can say too much about, but your TV is almost completely useless in Rainbow Curse. Since you’re drawing on the small screen of the GamePad, looking up at the TV will almost certainly get you in trouble and make you screw up.

If that’s something that bothers you or not is up to you.

I know I picked on this one a little bit, but Kirby and the Rainbow Curse is actually a good time overall. The graphics are excellent, unique and, most of all, a joy to look at and play through. On top of that, the gameplay is fun and the levels and characters are pretty imaginative.

On the flip side, the control is hit-and-miss on occasion and the sound is pretty blah. Also, oddly enough, you might not care for the game if you’re a Kirby fan, since the gameplay is so different than almost every other adventure he’s been on.

Jason's been knee deep in videogames since he was but a lad. Cutting his teeth on the pixely glory that was the Atari 2600, he's been hack'n'slashing and shoot'em'uping ever since. Mainly an FPS and action guy, Jason enjoys the occasional well crafted title from every genre.
@jason_tas
Previous Secret Wars’ Armor Wars Warzone is a high-tech paradise with a dark secret
Next DC Comics: A Visual History Updated Edition (Book) Review