Armor Wars sounds like one of the coolest Warzones in Secret Wars, with an armored-up citizenry and superhero populace, and one terrible secret. 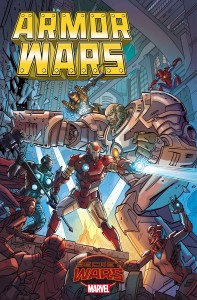 VERY different than the Armor Wars that you know from the classic Iron Man event, this world (and part of Battleworld) comes from a universe where everyone on Earth has to wear a suit of high-tech armor just to survive- even ultra-powerful superheroes like Hulk and Thor. A deadly virus has spread, and it kills everything non-armored, which means that every living soul owns his or her life to Tony Stark and his brother Arno.

The pair have a nice little rivalry going too, in which they’re constantly building up the world into a technological marvel. But there’s something wrong, and it’s not just the virus. A murder kicks off a spree of death that Baron Tony Stark must stem before things get out of hand.

“Plus, James is delving into the kind of emotional and hard hitting story he excels at,” continues Paniccia. “He’s doing some amazing world-building and bringing us a mystery that—as it’s peeled back—will shock readers and make their hearts sink into their stomachs.”

Armor Wars #1, a part of Secret Wars, lands in stores this Jube from the team of James Robinson and Marcio Takara, with cover art by Paul Rivoche.

Jason's been knee deep in videogames since he was but a lad. Cutting his teeth on the pixely glory that was the Atari 2600, he's been hack'n'slashing and shoot'em'uping ever since. Mainly an FPS and action guy, Jason enjoys the occasional well crafted title from every genre.
@jason_tas
Previous Here’s 15 years of Total War in 3 minutes, and a tease at what’s next
Next Kirby and the Rainbow Curse (Wii U) Review