Apotheon is a 2D adventure platformer, reminiscent of Castlevania and Metroid, that capitalizes on style and story to push beyond genre limitations.

The game and art direction are on point, supplementing the game’s genre and gameplay, which evolves with every level while maintaining core gaming mechanics. As you might imagine, this leads to fun and compelling play aplenty. And aside from the technical stuff, Apotheon is just a fun, nostalgic romp in Ancient Greece. 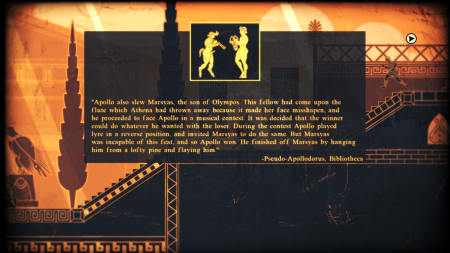 Story and style are king in Apotheon. Nikandreos, the main character, immediately earns your empathy as the reluctant hero chosen to rise against the gods. Zeus has decided that man must be destroyed, so he recalls all the immortals to Mount Olympus whilst he rains destruction upon humanity. Hera disagrees with Zeus’s tactics and decides to use Nikandreos to stop his rampage. She imbues Nikandreos with god-like powers to help him bring down the deities waging war against man.

Don’t place too much importance on these powers as there is no noticeable difference in combat or ability. It appears to be a plot device as to why Nikandreos can now travel to Mount Olympus and walk among the gods. The only real god-like power I witnessed was the ability to swim underwater indefinitely. The lack of god powers is not an issue though, and actually enhances the David and Goliath ambiance when fighting the various gods. The fights are challenging and require the player to adapt quickly to survive. Similar to other metroidvania games, each boss has a strategy to ensure victory. The boss fights and unique level designs ensure gameplay doesn’t become monotonous. 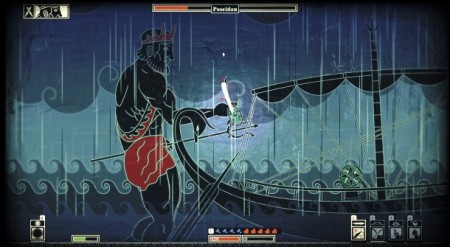 The level design is also tied greatly to the story and the lore of Ancient Greece. Many of the levels introduce various techniques or abilities, keeping the game interesting rather than repetitive. The combination of story, style, and gameplay create a unique game experience.

Designed to resemble the black figure pottery of Ancient Greece, Apotheon nails the ambiance and works perfectly with the genre. The soundtrack follows the story and interactions very well, supplementing the scene without overwhelming the action. There were a few times when I had trouble seeing the level because of the stylized texture; however, this was rare and in areas outside the main quest line.

I really enjoyed how much of the world I could explore. One of the best discoveries I made was how large the game is. There are tons of secret passages and doors, leading to new areas or treasures. While it is not necessary to find and explore these areas, it was a treat when I did. The freedom to choose my level of exploration was awesome and made rummaging around all that much more fun. 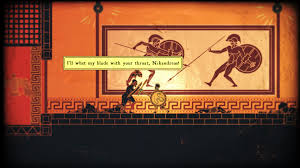 Unlike the looks though, the core mechanics of are not revolutionary; however, the variety of weapons and attack methods elevate the basic gameplay. Players can equip either a close-combat weapon, long-range weapons, combat tools, or potions. And thankfully, the switching between the four types as well as the various weapons of each type is very easy to do during combat.

The wide selections of weapons and tools allows players to tailor combat to their particular style. Also, the diverse areas require players to experiment with various weapons and techniques in order to continue. Players must pay attention to weapon choice too, as each weapon has unique range and limitations based on its real ancient counterpart. Weapons also degrade and will break with use (Oh, that’s pretty neat -ed). Nothing is worse than your heroic xiphon breaking while you’re taking down a cyclops. Luckily though, the variety of weapons and types along with combat tools keep combat from becoming a repetitive slog.

Slaying gods and soldiers is a good time in Apotheon, and the game beautifully marries style, story, and gameplay. The story is compelling and the art is beautiful. Every scene looked like a work of art from the Classical Period and the attention to detail is stunning. Each of these elements are amazing separately, but the whole is greater than the sum of Apotheon’s parts.

Apotheon was easily one of the most interesting and fun games I’ve played this year, pleasantly surprising me at every turn. If you have PlayStation Plus (it’s free right now) and a PS4, there is absolutely no reason you shouldn’t be playing this game.

Favorite Game: Shadow of the Colossus. Favorite Moment in gaming: 100% completing Legend of Zelda: Majora's Mask. Life isn't hard, Megaman is.
Previous The Assignment brings the horror of The Evil Within back to consoles and the PC
Next Spring Fever Hits PlayStation March 3rd

The Quake Engine resurgence continues with forgotten 90s gem Kingpin. Ready to rise to the …