One of the most popular of the different timelines and realities of the Marvel U, Marvel 2099 is heading to it’s own title as a part of Secret Wars. 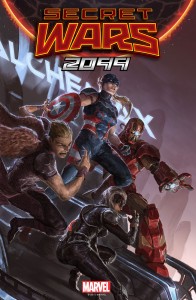 Well this is a nice surprise, especially since the Spider-Man 2099 monthly has been cancelled (or is on hiatus). Secret Wars 2099 takes place in the 2099 section of Battleworld, the patchwork planet that’s all that’s left of Marvel’s multiverse in the wake of Secret Wars.

Even cooler than a Secret Wars/2099 mashup is who it stars- the Avengers. Well, a future Avengers at any rate. And as with most 2099-labled books in the past, these heroes bare a striking resemblance to the heroes of the modern Marvel Universe. There’s a Captain America, a Hawkeye, an Iron Man, and others, but they’re all a little different than you’re used to, and they all have to deal with a future that bows to the mega-corporations.

“2099 has always been a bit dystopian, with corporate America out of control and heroes few and far between. For the first time, we’re going to see how that affects the Avengers,” says series Editor Devin Lewis. “What do the Avengers look like and stand for in a world where greed is the accepted ‘good’? How will that affect their values or outlooks? And, is there anyone left from the old days who still believe in the ideals of the Heroic Age?

The book has an awesome pedigree to, so there’s reason to hope that this could be a good one. Peter David will serve as writer and Will Sliney, who I’m not overly familiar with, will provide the interior artwork. David needs no intro for longtime comic fans, and Sliney looks to have a pretty cool, semi-realistic style that should fit nicely here.

Jason's been knee deep in videogames since he was but a lad. Cutting his teeth on the pixely glory that was the Atari 2600, he's been hack'n'slashing and shoot'em'uping ever since. Mainly an FPS and action guy, Jason enjoys the occasional well crafted title from every genre.
@jason_tas
Previous Looks like Nintendo’s Amiibo line will be getting some variants
Next Warhammer: End Times – Vermintide tells the tale of Warhammer’s end of days