Home / Comics / How will Marvel’s heroes spend their Last Days?

How will Marvel’s heroes spend their Last Days?

It’s the end of the Marvel Universe as we know it, and I feel fine. 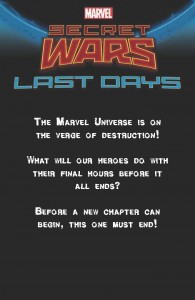 The skies go dark and the world begins to fracture.Secret Wars is coming, and with it the destruction of the Marvel Universe as we know it. Today, Marvel is proud to announce LAST DAYS, the first of three different types of series taking place during the upcoming, highly anticipated Secret Wars!

“What would you do if you learned today was your last day on Earth?” says Marvel Editor-in-Chief Axel Alonso. “That’s the question your favorite Marvel heroes are going to ask themselves in their LAST DAYS story lines as they brace for Secret Wars and the end of the Marvel Universe.”

Battleworld is set to transform the Marvel Universe as you know it. But before Secret Wars can begin, this chapter must come to a close. What will our heroes do with their final hours? What secrets will be unearthed? Who will they want to spend their LAST DAYS with?

“LAST DAYS is the first of three new brandings for series unique to Secret Wars,” says Marvel SVP Sales & Marketing David Gabriel. “Each branding will bear its own unique trade dress and logo treatment, clearly defining its relationship to the main Secret Warsstory. This will make it easier for fans to experience the full scope of Secret Wars. Don’t dare miss these epic tales as our heroes face their impending obliteration!”

Before Secret Wars can begin, the Marvel Universe must end. And it all starts this May as the entire planet faces their LAST DAYS!

I’m cautiously very optimistic about this latest event from Marvel that Last Days will be a part of. Then again though, I’d like nothing less than to see a full-on (or even soft) reboot of Marvel’s Universe of heroes and villains. I know, I know- Axel Alonso (E-i-C of Marvel) went on record recently saying that Secret Wars won’t be a reboot and that the publisher’s history isn’t “broken” and therefor doesn’t need to be rebooted in any way, but honestly, it kind of looks like that’s what’s happening.

As the Marvel U that you and I know comes to a close this Summer, and something else dawns after the end of Secret Wars (which just might be a melding of the Ultimate and stander Marvel Universes), I don’t really know what you’d call it other than a reboot. A fact that’s just fine with me. In any event though, we;re talking about Last Days here, and this lead-in for Secret Wars might just be a very cool event in and of itself as the biggest heroes all have some time to think and collect themselves before… whatever.

For the first time in a long time, I’m actually excited for a big time Marvel event and I can’t wait to see what they’re cooking up for Last Days and Secret Wars alike. Find out where the Marvel Comics Universe goes from here when Last Days starts up this May.

Jason's been knee deep in videogames since he was but a lad. Cutting his teeth on the pixely glory that was the Atari 2600, he's been hack'n'slashing and shoot'em'uping ever since. Mainly an FPS and action guy, Jason enjoys the occasional well crafted title from every genre.
@jason_tas
Previous Massive Age of Ultron connectable poster coming to Marvel’s Avengers books in April
Next Is Apple planning on building a joystick onto future iDevices?