Planet of the Symbiotes oozes into Guardians of the Galaxy #21

A planet full of Venom symbiotes is no problem for the Guardians… right? 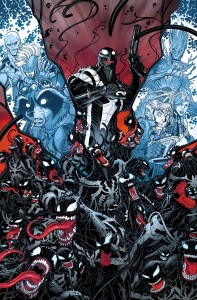 This November, the Guardians of the Galaxy face their worst nightmare as the new “Planet of the Symbiotes” arc kicks off in GUARDIANS OF THE GALAXY #21! Comic book superstar Brian Michael Bendis and Marvel Young Gun artist Valerio Schiti venture where no heroes have ever gone before – to the home planet of the deadly alien symbiotes! Ever since the Venom symbiote bonded with Flash Thompson, he has wielded it as a force for good, hoping to make the Earth a safer place. Only the far reaches of space are a little out of his depth! And with the Venom costume finally reunited with its own species – where will it’s allegiances lie? Trapped on a world full of hostile alien parasites, the Guardians of the Galaxy may begin to regret letting Flash Thompson join their team. Be there when the Guardians face a new horror in deep space as “Planet of the Symbiotes” kicks off in GUARDIANS OF THE GALAXY #21!

The plot led Spider-Man, Venom (who was an ally at the time), and Scarlet Spider (the first one) through a space warp to a planet that was dominated by the little oozy things. Their goal was to spread to Earth and take over mankind- or to out it more accurately, to dominate mankind. Seems that was the goal of the living costumes, to dominate, and the Vanom suit itself was a standout for wanting to bond with its host instead.

Whether this upcoming storyline will carry over any of those themes or Marvel will simply retcon them out remains to be seen, but it should be interesting nonetheless. And the Guardians of the Galaxy are involved with the creatures for the first time as well, which should draw all kinds of new readers since they’re the flavor of the year when it comes to comic book characters.

Valerio Schiti and Nick Bradshaw bring the Planet of the Symbiotes back to comics with Guardians of the Galaxy #21, hitting stands on November 19th.

Jason's been knee deep in videogames since he was but a lad. Cutting his teeth on the pixely glory that was the Atari 2600, he's been hack'n'slashing and shoot'em'uping ever since. Mainly an FPS and action guy, Jason enjoys the occasional well crafted title from every genre.
@jason_tas
Previous Skylanders Trap Team (Xbox One) Review
Next Constantine (TV) Review