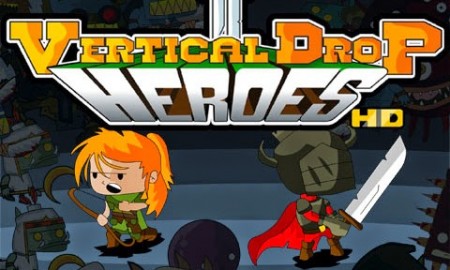 There are plenty of roguelikes around these days, and they are certainly popular.  There’s also a lot of flash games that have been revamped and polished.  Vertical Drop Heroes HD fits into both these categories, and takes the form of an action platformer, where your aim is to get your hero through ten levels of increasing difficulty, with no real explanation of exactly why you’re doing it.  However, while ten levels might not sounds like an awful lot, the game certainly feels like it’s much bigger.

When you start a game, you get a choice of three heroes with randomnly selected weapons, abilities and traits.  You start in the Temple of Knowledge, which is your home base where you can see the abilities you’ve collected and talk to various people who can give you upgrades.  You’ll get quite used to the sight of this place, because you’re going to be doing a lot of dying.  Each level contains a variety of enemies and a boss which you must defeat in order to advance.

As you traverse the levels, you will collect coins which you can use to upgrade your characters at the Temple, and activate various shrines along the way.  The shrines perform a variety of functions, such as sending out big fire and ice waves around the level, replenishing your abilities, and even sometimes making some gems appear, but also making extra enemies appear as well.  There are also keys you can collect, which allows you to unlock treasure chests, gateways and cages which contain trapped heroes, who will show their gratitude by helping you in your quest.  As you kill enemies, you gain experience and your character levels up, at which point your stats increase and your health replenishes. 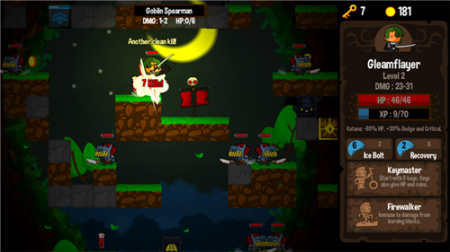 The first time you play, unless you are especially good or lucky, you will probably die the second level in.  At that point, you pick a new hero from another three randomly generated choices, and start back from level 1.  You lose a few coins for rerolling, but it’s not that many.  You then return to the Temple and give your money to various characters to upgrade yourself, such as the blacksmith, who will increase your attack power.  Once you’re satisfied with your choices, you go back into the levels and try again.  However, the layouts of the levels are randomly generated as well, so you never play the exact same level twice.

As you upgrade your characters, advancing through the earlier levels gets much easier.  By the time you’re powerful enough to advance all the way to the final stage, you’ll be able to defeat the final boss without much trouble.  This then unlocks a ‘New Game +’ mode, so you can continue with some more difficult challenges, should you wish to. 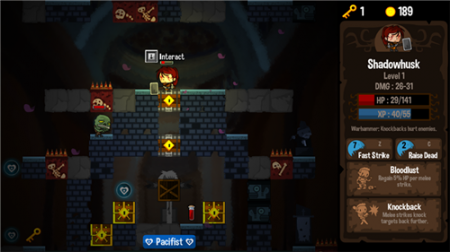 There are a couple of issues I had with the game, though.  There is a button to attack using your hero’s weapons, however you also automatically attack when you get near an enemy, and it seemed to me as though more damage was done when the auto attacks happen.  Also, the randomisation of heroes means sometimes you’ll get a hero who you can easily clear half the game with, then the next run you’ll get a duff set of heroes who struggle to beat the second stage.  This isn’t the sort of game you’re going to sit around and play for hours on end, but it’s a nice enjoyable game for you to jump in and out of for a little bit.

FINAL THOUGHTS
Vertical Drop Heroes HD is a solid, if unspectacular, game.  It’s difficult at first, but as you upgrade your heroes, it gets much easier.  The New Game+ mode adds some replayability, and there’s a multiplayer mode in there as well.  It’s slightly different from other RPGs, and it’s great fun to play in short bursts.  The random nature of the game means you might get frustrated at times, but that’s the nature of the beast.  If you love roguelikes and are looking for a great little time killer, then this is a game you should definitely take a look at.

Mike is Brutal Gamer's Indie Editor. He has been playing video games since the early 90s and is fond of racing games, puzzlers and MMOs. Typing /played while in WoW makes him cry, but not enough to stop him playing some more.
@Ognawk
Previous DLC to bring 6 months of new content to Alien: Isolation
Next Spidey and Ms.Marvel meet Spider-UK in Amazing #7

Ready to get dirty again? Publisher Deep Silver has revealed the car classes that you’ll …