Just who is the enigmatic Spider-UK and what connection does he have to Spider-Verse? 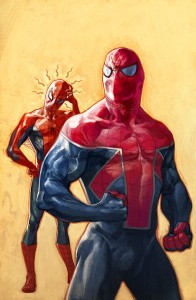 Together for the first time! The Amazing Spider-Man meets the Miraculous Ms. Marvel in the super hero team-up you’ve all been waiting for in October’s AMAZING SPIDER-MAN #7! And if that’s not enough, New York Times-bestselling creators Dan Slott, Christos Gage and Giuseppe Cammuncoli also bring you to the Edge of Spider-Verse!   As Spidey and Ms. Marvel face someone who looks a lot like Captain Marvel, meet the mysterious Spider-UK – but what is his connection to Spider-Verse? Seeds of the biggest Spider-Man story of all time are sown here, and no fan can afford to miss the epic AMAZING SPIDER-MAN #7– on-sale this October!

The Spider-Verse is bringing the weirdo Spider-Men out of the woodwork at this point. Spier-UK might be the oddest one yet (though that horror one was more than a little off) and that might have a big something to do with that spider-flavored Union Jack… that seemingly makes no sense at all.

All the Spidey’s in Spider-Verse have had some very cool backstories so far though, so I’m sure there’s going to be a very solid reason that this particular Spider-Man is basically a Spidey/Captain Britain mashup.

You’ll have to stay tuned though to find out exactly why that is. Not that you’ll have all that long to wait as Spider-Man and Ms.Marvel meet up with Spider-UK in The Amazing Spider-Man #7, which hits the racks from Dan Slott, Christos Gage, and Giuseppe Cammuncoli on October 8th.

Jason's been knee deep in videogames since he was but a lad. Cutting his teeth on the pixely glory that was the Atari 2600, he's been hack'n'slashing and shoot'em'uping ever since. Mainly an FPS and action guy, Jason enjoys the occasional well crafted title from every genre.
@jason_tas
Previous Vertical Drop Heroes HD (PC) Review
Next TriForce debuts their first Borderlands-themed replica at NYCC