Dark Horse head to the Grindhouse with new mini-series

Alex de Campi follows up her 2013 hit Grindhouse with another visit to the horrific with Grindhouse: Drive In, Bleed Out. 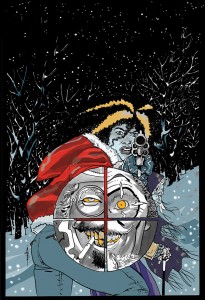 Grindhouse is back from the dead, and it’s meaner, badder, and dirtier than ever! In the first of four new exploitation opuses, we join writer Alex de Campi for “Slay Ride,” a bloody Christmastime western with art and covers by R. M. Guéra (Scalped, Django Unchained).

Kind of lays it all out for you right there huh? The Grindhouse series of minis is just about an exact replication of exploitation (grindhouse) cinema from the 1970s, which director Quentin Tarantino takes liberal amounts of inspiration from in certain ways. So as has been said before, if you dig his work, you’ll probably dig this too.

Most definitely for mature readers, Grindhouse: Drive In, Bleed Out starts its 8 issue run on November 12th from Dark Horse Comics.

Jason's been knee deep in videogames since he was but a lad. Cutting his teeth on the pixely glory that was the Atari 2600, he's been hack'n'slashing and shoot'em'uping ever since. Mainly an FPS and action guy, Jason enjoys the occasional well crafted title from every genre.
@jason_tas
Previous The newest gameplay video for Grey Goo shows off some blob power
Next Activision announces “full” Skylanders Trap Team game coming to tablets