Original Sin hits home for Spider-Man in Amazing #4 as his ‘sister’ Silk is brought into the light. 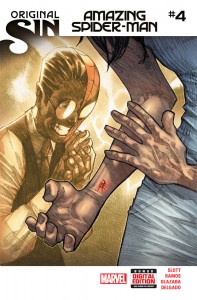 Hang on to your hats webheads, today Marvel is proud to present your first look at AMAZING SPIDER-MAN #4, the next blockbuster issue in the chart topping series and a tie-in to ORIGINAL SIN! A bite from a radioactive spider forever set young Peter Parker on his path to become the greatest superhero in history. But that’s not the whole story. Coming in July, New York Times Bestselling creators Dan Slott and Humberto Ramos uncover the truth behind the day the spider gave Peter his miraculous powers.

Someone else was bit. And you’re about to meet her. Prepare yourself for…SILK! The events of Original Sin have revealed her existence to Spider-Man. Who is this mysterious spider-powered person? And where has she been all this time?

“Why was this kept from Peter?” asks Dan Slott, in an interview with Marvel.com. “A good question to ask is ‘Who is keeping this from him?”

With the epic Spider-Verse event waiting in the wings, meet the character whose very existence will turn the wallcrawlers world upside down later this year! All will be revealed as Silk’s story comes to the forefront as your Friendly Neighborhood Spider-Man crashes headlong into Original Sin in July’s AMAZING SPIDER-MAN #4!

I am very interested to see how this one turns out. In terms of Original Sin revelations (and that is what the whole event is about after all), this is a pretty major one. Spider-Man’s origin has never really been mucked with at all in the comics, so this is really something new. And on top of that, introducing another spider-powered character is nothing to be taken lightly either- especially one that looks to not really want to be found. Why that is exactly is still a mystery.

Not for long though of course, as Amazing Spider-Man #4 is set to swing onto the racks on July 23rd from the team of Dan Slott and Humberto Ramos.

Jason's been knee deep in videogames since he was but a lad. Cutting his teeth on the pixely glory that was the Atari 2600, he's been hack'n'slashing and shoot'em'uping ever since. Mainly an FPS and action guy, Jason enjoys the occasional well crafted title from every genre.
@jason_tas
Previous Escape Dead Island changes up the DI formula this Fall
Next Savage Hulk rips into the online Marvel shop