Watch_Dogs gave me hope for the future of gaming; now, that sounds weird but let me explain. 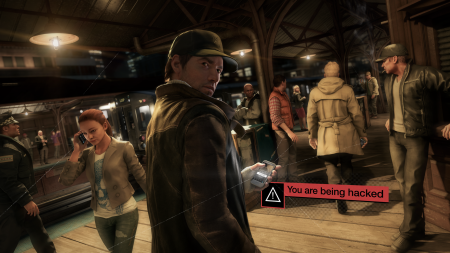 There we were, living our boring lives, playing our dry and predictable games (and you all know which ones I’m talking about). Suddenly, out of nowhere the god of game design, the almighty Ubisoft bestows upon the earth a gift so beautiful, that man knows not how to handle its grace… and this gift is known as Watch_Dogs.

The idea of a city (or even more so, an entire world) being monitored and tracked by the government is no new idea, and while some television shows have managed to do it (See: Person of Interest), few videogames have ever given players the ability to become the hacker and use the systems for themselves. Watch_Dogs manages to put players in the body of a hacker named Aiden Pierce. The game starts out with Aiden talking to his partner in crime, Damien Brenks.

They are hacking into the bank accounts of the rich, when Aiden realizes they have taken enough he starts to leave, but Damien (talking to him through a blutooth headset) tells him to keep going. A few moments later they notice that they have been tracked down by a rival hacker. I don’t want to spoil anything (even though it really is only a few minutes into the game), but this causes something to happen that makes you genuinely want to find who caused it.

The main draw of the game I suppose, is the ability to hack the CtOS, the electronic web connecting all of the city of Chicago. Pierce is armed with an array of guns, but let’s be honest, who really cares about those when you have a cell phone that can do anything from blowing up a water main to obliterating a transformer (that is, the electronic device, not the vehicle that is more than meets the eye). Not only does the phone allow you to control most electronic devices, you can also be a complete creep and hack into phone conversations, texts messages, read extremely personal details of the lives of complete strangers (for instance, you can find someone who ‘Engages in prostitution’, or worse yet… nevermind, this is an ‘M’ rated game we are talking about on a fairly family friendly website).

There are a multitude of side activities in Watch_Dogs too, some of them don’t even require you to cave someone’s skull in with a baton. Such activities include: Drinking Games (my personal favorite, if for no other reason than you can watch your opponent pass out if you win), public gambling (‘Watch the Ball’, things like that), Poker, and a few other less interesting ones. Another set of minigames are called Digital Trips and they are… weird to say the least. My two favorites are Mech Spider (think Rampage), and Psychedelic (I’d explain it, but honestly, you wouldn’t believe me if I did).

As for activities in which you can cave in someones face, you can watch for “potential crimes”, take one of what are known as ‘Fixer Contracts’ in which you drive a car to an objective point ( my least favorite, as I find them boring), Gang Hangouts (which I find are a blast), and finally Criminal Convoys. These can be very fun, and require a little ‘on your feet planning’. In Criminal Convoy, you are required to either knock out or kill a specific target in the midst of a row of hostile vehicles.

Usually, around this point in a review I talk about the music in a game, and while there are a few good songs in the playlist, I find myself shutting off the music more often than not.

I love Watch_Dogs, it is undoubtedly one of the best games I have played in a great while and, without a doubt, the best Ubisoft game I have played since Far Cry 3 (No, I don’t like Assassin’s Creed IV, nor have I played Blood Dragon, so hush).

I have found it getting rather mediocre scores from other reviewing sources, but honestly I find them to be a bit harsh. Yes, the release date push-back was annoying and the graphical downgrade is a bit frustrating, but the game really does look quite pretty. There is no reason why anyone should not play this, the characters are fantastic, the gameplay is sublime, the vehicles all control very well, the minigames are fun… it has all the makings of a truly amazing game, and I don’t understand why so few people seem to agree with me on  this.  Watch_Dogs is fully deserving of a 9/10.