Who killed the Watcher of Earth? And who has the ultimate black book on all the characters that make up the Marvel U? Issue #2 of Marvel’s big Summer crossover event holds more questions than answers. 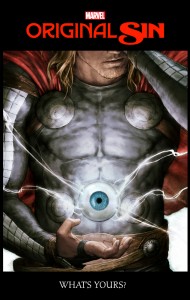 This May, ask yourself – who holds the eye? Today, Marvel is proud to present a new look at ORIGINAL SIN #2 – the next chapter in the blockbuster Marvel Universe event from New York Times Bestselling writer Jason Aaron and artist Mike Deodato!

As even more bodies turn up, the investigation will take the Avengers, the X-Men, Spider-Man, the Fantastic Four and more to the edge of the universe and beyond. And a confrontation with the #1 suspect will yield cataclysmic results that shake the Marvel Universe to its very core!

“This issue leads to the moment where the Pandora’s Box that is the Watcher’s accumulated lifetime of observations gets opened,” says Marvel Executive Editor Tom Brevoort. “And sends the heroes of the Marvel Universe all off in different directions as information that they’d prefer to stay buried, or never knew about in the first place, gets released into the world.”

Sometimes information can be stronger than even the most powerful heroes, and the Marvel Universe is about to find out just how deadly secrets can be. Who ripped the Watcher’s all-seeing eyes from his head? And who holds their many secrets? Don’t miss the EXPLOSIVE climax that will have everyone talking when ORIGINAL SIN #2 hits comic shops this May!

The ultimate retcon event rolls into its second issue of history-overturning happenings in Original Sin #2. Personally, I don’t mind the changes if they add story and are legitimately interesting- not just there for shock value. So far, it looks like Original Sin is offering something of a mixed bag in that regard with some actually cool stuff like Tony Stark’s involvement in the Gamma Bomb tests. Unfortunately, we also get some things that don’t look terribly necessary like Silk, the second person bitten by a radioactive spider.

In any event, Original Sin has the smell of a classic Marvel crossover all over it and that’s a good thing. You’ve got all the big time characters involved, a cosmic-level event, and some major changes to the Universe. It kind of reminds me of stuff like Infinity Gauntlet and War from the ’90s, some of my personal favorites, so I’m remaining cautiously optimistic that there’s going to be a lot more good than iffy in Original Sin.

As for issue 2, more curveballs and more questions as to what’s exactly happening and who’s to gain from it all. I’ve got my own thoughts on the matter, how about you? Find out more and get a deeper look into the scandals to come in Original Sin #2, on the racks on May 21st from Jason Aaron, Mike Deodato, and Marvel Comics.

Jason's been knee deep in videogames since he was but a lad. Cutting his teeth on the pixely glory that was the Atari 2600, he's been hack'n'slashing and shoot'em'uping ever since. Mainly an FPS and action guy, Jason enjoys the occasional well crafted title from every genre.
@jason_tas
Previous Divinity: Original Sin gets an armory worth of new additions on Early Access and a release date
Next The legend is true, there be ET carts in that landfill