The Amazing X-Men have Nightcrawler back, but now they’ve got to face off against a marauding army of demons headed up by the dreaded Azazel. 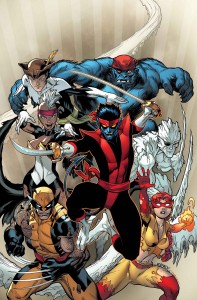 This March, the most bombastic X-Book continues! Marvel is proud to present your first look at AMAZING X-MEN #5, from the critically acclaimed creative team of Jason Aaron and Ed McGuinness! The X-Men have been reunited with their fallen brother Nightcrawler – but how long will the reunion last? Azazel and his fleet of hellish warships are advancing – set to pillage the afterlife for all eternity! Now, Nightcrawler – the most swashbuckling X-Man of all, must once again take up the sword to save the entire universe! And with his team of amazing X-Men at his back, there’s no stopping him! But as the battle for the afterlife commences, one of the X-Men must make the ultimate sacrifice. Don’t miss the next blockbuster issue of the series that has everyone talking when AMAZING X-MEN #5 hits the stands this March!

This is one of those stories that’d only makes sense in terms of the X-Men. The team literally goes to hell and fights off a whole mess of demons to rescue Nightcrawler. Personally, I’m pretty pleased that he’s back as Kurt has always been one of my favorite X-characters and the Marvel UNiverse really didn’t feel the same without him.

Now that he is back though, he might wish he wasn’t since he and the rest of the X-Men are headed into a collision with Azazel’s fleet of nasties in a fight for the afterlife itself. Yes, that’s crazy to the extreme, but this is the X-Men we’re talking about here; it’s par for the course.

Oh, and Ed McGuiness is ripping it up on this book. Seriously great stuff. Catch his artwork and the scripts of writer Jason Aaron when Amazing X-Men #5 *bamfs* onto the stands on March 26th.

Jason's been knee deep in videogames since he was but a lad. Cutting his teeth on the pixely glory that was the Atari 2600, he's been hack'n'slashing and shoot'em'uping ever since. Mainly an FPS and action guy, Jason enjoys the occasional well crafted title from every genre.
@jason_tas
Previous InXile updates Wasteland 2 Beta big time
Next The Uncanny Avengers take on Planet X