A whole bunch of Marvel’s best selling recent books are headed back to press for reintroduction on the racks of your local comics shop. If you missed out on some the best stuff from Spidey, the X-Men and more in the last few weeks, now’s your chance to catch up. 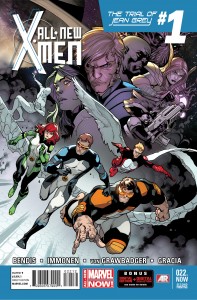 If you regularly read our comic book coverage here on BG, it probably comes as no surprise that I’m a big fan of physical comics. I dig the digital variety too, but usually as a last resort if I can’t find a book at retail or just want to have a copy that I can’t ‘lose’ or see destroyed somehow. So with that in mind, Marvel Comics’ latest announcement that a mess of their monthlies are going back to print for a second time definitely puts a smile on my face.

True, the comics headed back into comic book stores are some of the publisher’s biggest and most popular, but just the fact that all of these books sold out at retail proves that the day of the real world comic book are far from over. Digital might have taken some of the market share (and it is admittedly pretty cool for lost of reasons), but physical copies are still hanging on and still grabbing plenty of readers month-in and month-out.

And so, without further ado (or further soap-boxing), here’s what’s headed back to the racks some time soon:

There you have it Marvellites, if you missed any of those issues and you have a some gaps in your long boxes, you’ll be able to grab all of the above off the racks this coming March at your LCS. In the meantime, check out the alternate variant covers for the upcoming second runs below.

Jason's been knee deep in videogames since he was but a lad. Cutting his teeth on the pixely glory that was the Atari 2600, he's been hack'n'slashing and shoot'em'uping ever since. Mainly an FPS and action guy, Jason enjoys the occasional well crafted title from every genre.
@jason_tas
Previous Transformers Universe re-emerges, tests its metal with new trailer
Next A familiar face shows up in Sakurai’s pic of the day