Looking for a console to play your SNES, NES, Genesis and maybe even GBA games? The Super Retro Trio just might scratch that retro-gaming itch. 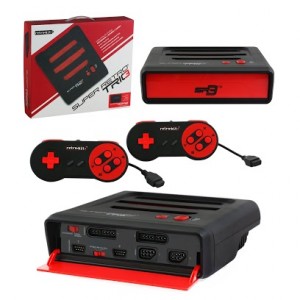 Third-party 8 and 16-bit consoles aren’t really new in the video game world. There are already a handful of them on sale online as well as in some specialty stores (if you can find one of those), but ones that actually competently play games across multiple older consoles aren’t all that pedestrian as of yet- especially those that can play titles from four different libraries.

While the Super Retro Trio can’t do that right out of the box (hence the name), it certainly can with the help of an expansion module that’s actually compatible with almost any third-party retro-rig and even the original SNES from Nintendo. Basically, the little device allows for GameBoy Advance gaming on the big screen, which pretty much would have made me die of happiness back in the Nintendo handheld’s heyday.

Even without that add-on though, this surprisingly cool looking little red and black box can readily play games from the golden and silver ages of gaming. And by that I mean pretty much any title you have from the Nintendo Entertainment System, Super NES and Sega Genesis should play just fine in all their pixelated glory.

Innex, who held back manufacturer Retro-Bit’s newest console after finding it originally had some “controller mapping” issues, now has the Trio ready to go and says that any bugs in the hardware have been suitably exterminated.

“We stand behind our products. There is no room for less than the highest level of satisfaction,” states Innex President, Titi Ngoy. “Retro-bit® is one of the elite brands that Innex distributes worldwide and this collaboration with the manufacturer will ensure a successful launch of this outstanding console.”

The core unit, which includes NES, SNES and Genesis cartridge ports (as well as controllers and a very slick little fold down gate with controller ports if you should like to use your original pads) will run you $69.99 USD. If you’d like to add GBA compatibility to that list, an adapter can also be had for the price of $44.99 USD. That tag might seem a bit steep at first for something like that, but  keep in mind that not only are you adding another library onto the Super Retro Trio- you’re also getting multiplayer right along with it since the adapter has a port for a GBA link cable.

Start digging through the basement for those old carts, the Super Retro Trio will be available somewhere in “mid-to-late March”.

Jason's been knee deep in videogames since he was but a lad. Cutting his teeth on the pixely glory that was the Atari 2600, he's been hack'n'slashing and shoot'em'uping ever since. Mainly an FPS and action guy, Jason enjoys the occasional well crafted title from every genre.
@jason_tas
Previous The man who will be Wolverine meets Mr.Sinister in Origin II
Next Final Exam (PC) Review