The New Warriors return to the Marvel U next month 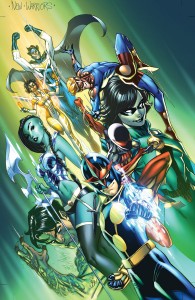 Witness the next generation of the Marvel Universe this February in NEW WARRIORS #1 – an all-new action packed ongoing series from blockbuster writer Christopher Yost and red-hot artist Marcus To! New Warriors mainstays Speedball and Justice are getting the band back together with a new team of heroes the likes of which you’ve never seen before!

“They’re eight people from different corners of the Marvel Universe, coming together to do the right thing, to be heroes,” says writer Christopher Yost, in an interview with Marvel.com. “They’re not kids, they’re not seasoned heroes for the most part, but they’re idealists. Sometime it’s okay to be a hero for the sake of being a hero; to be with a team because they’re your friends, because it’s fun.”

Evolution has gone off the rails. There are super humans, mutants, Inhumans, clones, aliens, and more everywhere you turn. Humanity no longer exists as the dominant life form on the planet. And not everyone is pleased! The High Evolutionary has raised an army to combat these “superior” beings – through complete extermination!

Now, Speedball, Justice, Nova, Scarlet Spider, Sun Girl, Hummingbird and more must stand together against the rising tide. Don’t miss a fresh start for the heroes of tomorrow this February in the exciting NEW WARRIORS #1!

New Warriors joins Hulk, the Amazing Spider-Man and X-Force as a part of the newest wave of titles coming from Marvel in 2014. While this may not be the exact same team that you remember from the last time you saw them, this New Warriors is more than a little punchy and ready for action.

I actually really like the lineup on this book. Not that I know all of the members in any in-depth way, but I’m more than a little familiar with Justice and Speedball; the two holdovers from the original team. Nova is also a favorite of mine and Scarlet Spider is one of my favorite characters in the Marvel stable right now- bar none.

NW should have some very interesting interplay amongst the team, to say the least, and the overall ‘evolution’ theme of the first big story arc sounds pretty great. I’ve been wondering when all these different super-groups in the current Marvel timeline were going to start to grate on each other and it looks like that time might very well be now. Not that things have been going swimmingly till now, but you get my drift.

This one’s going on my pull list and if you’re targeting it as well, set your calendar for the 19th of February. That’s when New Warriors #1 will hit from the team of Christopher Yost and Marcus To and of course, Marvel Comics.

Jason's been knee deep in videogames since he was but a lad. Cutting his teeth on the pixely glory that was the Atari 2600, he's been hack'n'slashing and shoot'em'uping ever since. Mainly an FPS and action guy, Jason enjoys the occasional well crafted title from every genre.
@jason_tas
Previous Microsoft buys the Gears of War franchise from Epic
Next Kingdom Come lances its Kickstarter goal in just 48 hours