The first issue of Dark Horse Comics’ adaptation of the upcoming Ninja Gaiden spinoff is ready for download. 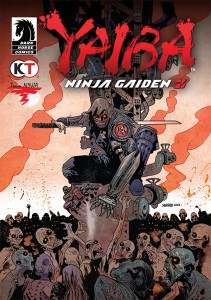 In YAIBA: NINJA GAIDEN Z, players will battle fierce zombies as Yaiba, a cyborg ninja who will do anything to get revenge and stay alive. Cleaved in two, he is brought back to life with cyber-technology. Brandishing his ninja sword and the mecha weapons in his cyber arm, he slaughters zombies with brutal, over-the-top abandon. Step into a stylized living comic book where stunning graphics depict a world gone mad. Hordes of undead can only be stopped by Yaiba’s willingness to use any means necessary to get the job done. Will he kill by turning his cyber arm into a razor chainsaw for slicing up undead—or just rip off an opponent’s arms to use as zombie nunchucks? Both possibilities fill Yaiba’s heart with twisted laughter in this collaboration between famed developers Team NINJA and comcept’s Keiji Inafune.

As far as Ninja Gaiden games go, Yaiba: Ninja Gaiden Z is definitely something different. Not only does the title look like it has a ton of dark humor, but it’s also loaded with zombies and stars a cyber-ninja named Yaiba instead of the usually hack and slasher, Ryu. The new digital-only book of the same name will pick up on all of this and start with something of a flashback story as Yaiba recounts the story of how his blade got the name ‘heartless’ to his associate Ms. Monday.

Brought to life by the writing team of industry vets Tim Seeley and Josh Emmons, as well as series artist Rafael Ortiz and colorist Carlos Badilla, Yaiba: Ninja Gaiden Z (the digital comic) sports some seriously cool cover art from James Harren and is available right now on Dark Horse Digital and on the Dark Horse App for either Android or iOS. Yaiba: Ninja Gaiden Z the game, which is on the way from Team Ninja and Keiji Inafune, will be available on March 18th for the Xbox 360, PS3 and PC.

Jason's been knee deep in videogames since he was but a lad. Cutting his teeth on the pixely glory that was the Atari 2600, he's been hack'n'slashing and shoot'em'uping ever since. Mainly an FPS and action guy, Jason enjoys the occasional well crafted title from every genre.
@jason_tas
Previous Plants vs Zombies: Garden Warfare gets even weirder with new trailer
Next A pile of new screens arrive for Tex Murphy as new site goes live