Today has been a bountiful one for those who are anxiously awaiting Donkey Kong Country: Tropical Freeze. New footage aplenty, including the first boss fight. 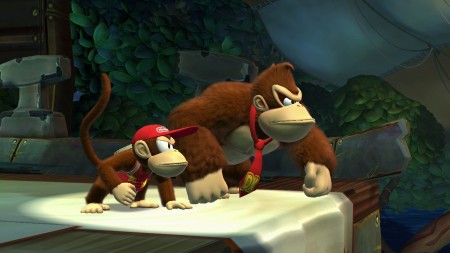 The first of the Vikings’ vanguard makes his appearance, a giant seal clad in armor challenges Donkey Kong and Diddy Kong to a fight. This boss attacks you in a rather large half pipe that he slides on. Every time you jump on him, he falls into the water, and proceeds to pelt you with innumerous enemies that bounce around on the arena. The boss appears to be quite a damage sponge, soaking up a deluge of attacks from the kongs. After he takes enough hits, the seal gets angry and the second phase of the battle begins. He unleashes a group of penguins, and they come up from underwater to jump on the player.

In the third and final phase, he takes some penguins with him to the top of the half-pipe, and they slide along with him, attempting to collide into DK and Diddy. It’s a real nice boss fight, and the music even sounds good. What should also be appreciated is how it looks. The way the room is dimly light up and filled to the brim with junk. It really does give you the feeling that you’re in a dank and broken down environment.

Well, my name's Christopher Deleanides as you all know and I'm the Nintendo Editor here at BG. I've been playing video games since 1992, and I've been a Nintendo fan the entirety of those years. My love for video games as well as Nintendo hasn't changed, and probably never will. The only thing that comes close is politics, as I'm very deeply involved in both local and international issues.
Previous Metal Gear Rising: Revengeance (PC) Review
Next Borderlands 2 official on PS Vita?