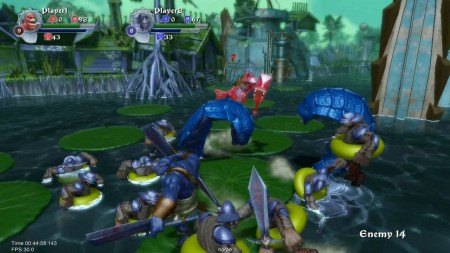 You play as one of four Orc heroes set on revenge for the human’s pollution of their land in Orc Attack: Flatulent Rebellion. This pollution has led to some interesting (read: disgusting) problems for our orc heroes. The pollution has not only devastated the orc lands, but it has also turned them quite gassy.

Orc Attack’s visuals look, and feel quite dull, and the colors seem a little muted. Graphically there is nothing eye popping about Orc Attack and for a fantasy game it feels too rooted in a more realistic color scheme. The character designs of Orc Attack, like the visuals, are nothing grand either and are very generic.

The sound here is also a very lack luster affair. And that goes for pretty much everything from the unenthused narrator to the lowly grunts and cries of enemies. The sound quality is crisp, however it is just too forgettable to make any impact. To heap insult to injury the sometime stuttery frame rates can really break gameplay too and turn co-op play into a headache inducing mess. 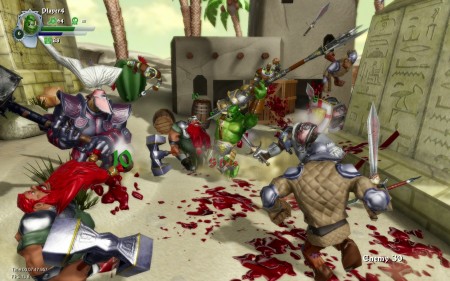 The story of Orc Attack, or the never ending joke, is wrought with heavy handed poop and fart jokes. The game descends into a stereotypical juvenile humour that is unsatisfying to watch, and hear. Overall the story elements of the game could have been somewhat interesting, even sans the fart humour, but nothing truly creative was added to flesh out any sense of urgency to the heroes struggle. Sadly it’s a very forgettable tale.

One saving grace for any hack ‘n slash game would be its gameplay mechanics. You can look past poor visuals and even a forgettable story in a game like this, but if the game is not fun to play at all due to its poorly created mechanics then it is doomed.

Some glaring failures in development of the game were leaving out camera controls. Lack of camera controls for the player will usually end up causing the camera to look the opposite way of oncoming enemies during combat which is infuriating.

Basic movement controls feel slightly sluggish as well when moving the character outside of combat. That combat is also a very simplistic and generic endeavor by the way. The basic, quick, and power attack are your only melee moves which is hugely limiting. With only two options for fighting, the patterns start to emerge, and doing the same attacks over and over removes any sense of immersion in the combat. The lack of any real enemy A.I. makes combat even more of a chore, and even less satisfying. 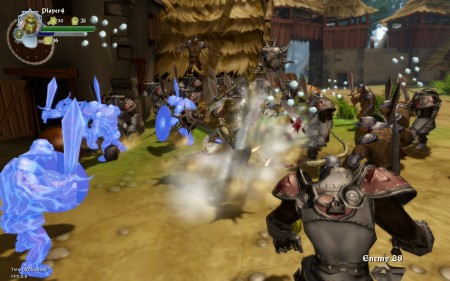 Orc Attack tries to differentiate itself with its story, but it leaves everything else generic and bland. It’s almost as if the developer made a generic hack ‘n slash, and then realized it had no originality so they decided to add fart humour to give it some laughs. Yes, you can select a “clean” mode, but that makes the game even more generic by replacing the gas meter, and fart/burp attacks for a mana meter, and the attacks become plain-Jane area and ranged magic.

The hack ‘n slash genre is a complex one to master, and sadly Orc Attack fails to meet the challenge. With dull visuals, a boring story, simplistic combat, and a very juvenile sense of humour Orc Attack leaves much to be desired. Pass on it.

Jeremiah's been gaming since he was old enough to hold a controller, and he won't stop until he's incapable of holding it any longer. Jeremiah has been firmly planted in geek cutlure since birth, and loves every minute of it.
Previous New Donkey Kong Country: Tropical Freeze screenshots
Next She-Hulk #1 (Comics) Preview