Stryfe’s ‘Vendetta’ rages towards it’s end as he pits Cable’s daughter Hope against the mans who’s pursued her through the ages- Bishop. 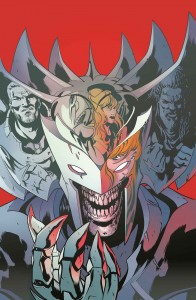 This January, Vendetta reaches its epic conclusion in the pages of UNCANNY X-FORCE #17 – from blockbuster writer Sam Humphries and red-hot artists Harvey Tolibao and Dexter Soy! Classic X-Force villain STRYFE has returned and is determined to exact his revenge upon Cable…by taking from him what he holds most dear: his daughter, Hope! But rather than killing Hope, Stryfe plans to corrupt her. He’s put Bishop—the man who relentlessly hunted her across time—in Hope’s crosshairs…and the means to end him in her hands. Will Stryfe get his revenge by enabling Hope to get hers? One thing’s for sure: after this, X-Force will never be the same. Don’t miss the senses-shattering conclusion to “Vendetta” this January in UNCANNY X-FORCE #17!

I’m love with this arc. Not only do we get to see more of Cable and a much closer to the original X-Force in action, but we also get freakin’ Stryfe! If you’re a fan of the classic X-Force books from when the team first debuted near the end of the New Mutants run way back in 1989 (Rob Liefeld’s run) then there’s little doubt that that’s something you’d be interested in.

For my two cents, the New Mutants/X-Force comics of ’89 and the ’90s in general were some of the best stories told in the X-Universe. To see so much of that coming back up in the pages of Uncanny X-Force now is just too cool.

Issue #17 is however, is the ‘conclusion’ of Vendetta, so if you might want to catch Stryfe and Cable at each others throats now while you still can- although, I wouldn’t be too surprised to see old chrome-head pop back up again… and again… at some point. Catch Vendetta’s final issue when it lands with Uncanny X-Force #17 on the 29th of this month from Marvel Comics and the creative team of Sam Humphries, Harvey Tolibao and Dexter Soy.

Jason's been knee deep in videogames since he was but a lad. Cutting his teeth on the pixely glory that was the Atari 2600, he's been hack'n'slashing and shoot'em'uping ever since. Mainly an FPS and action guy, Jason enjoys the occasional well crafted title from every genre.
@jason_tas
Previous CES14: Vizio announces new Reference Series, capping off at 120″
Next Deadpool goes digital this month with Infinite Comics