DST’s box set of Minimates featuring some of the biggest characters from the Age of Ultron storyline is in stores now- including the first ever Minimate of Marvel Universe newcomer, Angela! 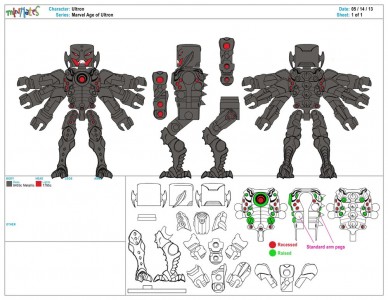 Age of Ultron was kind of a divisive crossover. I’ve heard from fans who both loved and hated the series for a bunch of different reasons. What’s not too controversial though, are Diamond Select Toys’ Minimates. The 2″ tall mini-figures is one of the longest running toy lines around and a favorite of pretty much everybody. The Age of Ultron set, in stores this week, is one that’s sure to please too- even if the actual comic wasn’t one of your favorites.

Included in the set is Iron Man, Nick Fury, former Spawn mainstay turned Marvel U hero Angela, and the main bot himself- Ultron. All four characters sport their looks from the series, include appropriate accessories (Tony has removable helm and boots, Angela has her sword) and all of ’em are looking pretty slick. I particularly dig that version of Fury; really neat look for him.

If you want a set for yourself, you can catch the Age of Ultron box set in stores starting today at your local comic shop.

Jason's been knee deep in videogames since he was but a lad. Cutting his teeth on the pixely glory that was the Atari 2600, he's been hack'n'slashing and shoot'em'uping ever since. Mainly an FPS and action guy, Jason enjoys the occasional well crafted title from every genre.
@jason_tas
Previous Avengers World #1 (Comics) Preview
Next Nintendo touts Wii U as the “best choice this Holiday”