Nintendo touts Wii U as the “best choice this Holiday”

While that’s probably not all that shocking (a company thinking their own product is great?), they actually just might have something there.

It’s no secret that the Wii U hasn’t sold nearly as well as the Wii did when it caught fire at it’s launch in 2006 and subsequently enjoyed a tremendous run through the last half of the decade. The Wii U has some very big things going for it this Holiday Season though; namely Super Mario 3D World and The Legend of Zelda: The Wind Waker HD.

While the just released Xbox One and PS4 both have their share of solid launch titles, it just might Nintendo with its one-year old Wii U that has the best lineup of software. Super Mario 3D World is maybe the best title in the franchise in a long, long time too and a genuine Game of the Year contender. Think about that statement for a second and let that sink in as we’re in a year that saw GTAV and a host of other triple-A games hit consoles.

If you’re on the fence about the Wii U, Nintendo has released this handy-dandy little infographic about the system to try and sway you their direction. Honestly, pr piece or no, they make some good points. 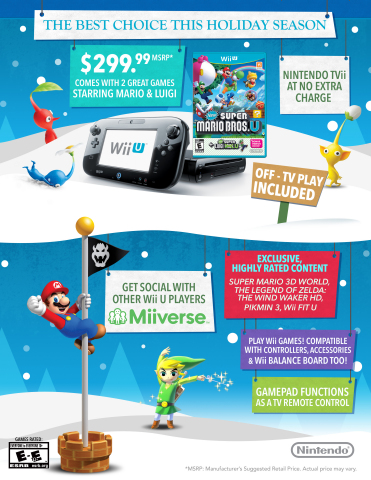 Oh, and if I might add, if you’re looking for a solid handheld console this Holiday, there’s one big reason to think 3DS; it’s called The Legend of Zelda: A Link Between Worlds. It’s really, really great.

Jason's been knee deep in videogames since he was but a lad. Cutting his teeth on the pixely glory that was the Atari 2600, he's been hack'n'slashing and shoot'em'uping ever since. Mainly an FPS and action guy, Jason enjoys the occasional well crafted title from every genre.
@jason_tas
Previous Age of Ultron Minimates in stores today
Next Order before the 16th and take a little something home for the Holidays from TriForce