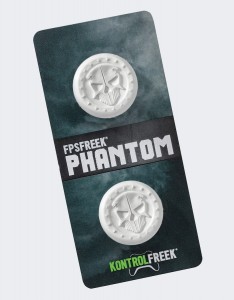 KontrolFreek has been around for a while now and, while the idea behind them is pretty simple, it’s also one that’s wholly original- each pack of KontrolFreeks contains a pair of thumbstick-altering stick covers. These covers snap right onto both sticks (or just one if you like) on your stock Xbox 360 or PS3 controller giving you better control and aiming in FPS’ or any kind of action title really.

Although we’ve got the new Call of Duty-inspired FPS Freek Phantom’s as the headliner here for this review, we actually got to try out a trio of designs courtesy of the company. So with that in mind, I’ll give you a brief rundown of the FPS Freek Vortex’, Ultra X’ and, of course, those Phantoms.

All three of the designs are engineered a little bit differently and suit different tastes and situations in games, so let’s start with the Vortex’ as they’re the most unique of the bunch. That’s because they actually come packaged with two different stick-covers whereas the rest of the offerings that we were sent for review include two identical pieces.

In the box, you get a standard height Freek and one that’s shorter, concave and closer to the original stick size. Oppositely, the taller Freek in the set is convex, which is designed to give players a better grip when aiming and shooting. The shorter Freek (which feels really weird to type) is meant to be for those who really don’t want a taller joystick for their movement and ‘right stick’ functionality (like CQC moves) in games.

I really liked the dynamic that the Vortex created and to be honest, even thought the Phantoms are the star of the show, this might be my favorite of the packs that we were sent. The Vortex’ are bright orange in color (which I really liked too) and have a soft rubbery surfacing that’s really comfortable to play with- especially in longer sessions. I found that the shorter movement stick-cover (which could actually be used for either stick) was really terrific too and gave me a nice ‘replacement’ for the usual right thumbstick without altering the height all that much.

As for the left stick and it’s heightened stature and supposed increased control and precision- it actually does work. The extra height lends itself to doing pretty much exactly what the company claims. While I don’t know if it adds 40% more of a range of motion, it does do a heck of a lot and I can imagine that it’s probably somewhere close to that if not that figure on the nose. With the taller joystick, I could actually make smaller movements and get a bigger reactions on screen from my character. It really does make aiming easier, even for someone who’s not exactly of the ‘pro-gamer’ echelon when it comes to FPS’.

The same goes for the Ultra X, with a few fairly large differences. First of all, these two stick-covers are of the same height (which is more the norm for KontrolFreek’s line), and have a somewhat exaggerated convex appearance like the left stick-cover that’s included with the Vortex. The surface of the Ultra X’ is dimpled too, meaning that they have little indentations across them (they kind of look like black golf balls) that can enhance your grip.

I liked the convex nature of the Vortex, so I really enjoyed using the Ultra X’ too. I see why the Vortex set includes two sticks of differing heights though as I wasn’t crazy about having both the movement and aiming sticks being at the same higher positions. Thats kind of the beauty of the KontrolFreeks though- if you don’t want both of them on the pad, then you don’t have to clip on the pair. You can even mix and match if you like and use the Ultra X for the left stick, the Vortex for the right and have a little Frankenpad action.

Much the same as the Ultra X, the FPS Freek Phantoms are both of equalling height and texture. What makes them different is that they’re concave like a standard PS3 or Xbox 360 pad’s sticks, and of course they’re bright white and have some very cool skulls reminiscent of the Call of Duty: Ghosts logo laser-etched into them.

Of the three, it’s the most striking design by far and looks really cool attached to a controller. The surface of the Phantoms is also somewhat rubbery so you do get the enhanced grip, just not to the same level of the Ultra X or the Vortex since these aren’t convex. You might actually prefer the more standard design of the Phantoms though, as the other two did take a little getting used to. Once again, one of the coolest things about the KontrolFreeks is that you can mix them up if you like, and buy a set that’s perfectly tailored to you and how you like to play.

They won’t break the bank either at the $14-19.99 USD range and basically give you a whole new controller experience and it’s those two points that really put them over the top for me. With a minimal cost and the fact that these fit right onto your standard, stock control pad for either the Xbox 360 or the PS3, they’re as much of a no-brainer as you can get. More often than not, using your first-party controller is a preferable option to using a third-party pad too, and in this case you get the best of both worlds as you get your controller and your enhancements too.

I actually liked these so much that I miss them when playing on the Xbox One and PS4, which should tell you a lot about how great they are.

If you like first-person shooters, the Freeks are as great a solution to wanting a little something to give your game an edge as anything. And though we tried out the Xbox 360 and PS3 versions, if you’re going next-gen and are looking for those, they’re on the way from the company and should be out sometime early next month.

That way you can Freek-out however you like, even in the next generation (or should I say current generation?).

Jason's been knee deep in videogames since he was but a lad. Cutting his teeth on the pixely glory that was the Atari 2600, he's been hack'n'slashing and shoot'em'uping ever since. Mainly an FPS and action guy, Jason enjoys the occasional well crafted title from every genre.
@jason_tas
Previous It’s a special Saints Row IV kind of Holiday with new DLC pack, pair of contests
Next Shakespeare classes up Typing of the Dead