Behold the boxed glory of two of the most popular Image Comics properties-turned-Minimates. 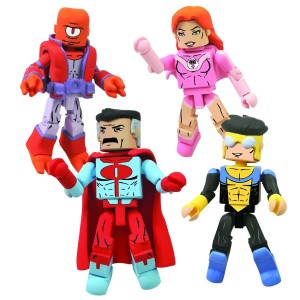 Diamond Select Toys has released a TON of Minimates figures over the years for just about every property you can imagine- from the huge to the minuscule. These kinds of ‘mates are my favorite though- lines made from smaller comic and movie characters who probably wouldn’t stand a chance at getting a full 6″ figure line from any other company. DST rocks it in this way and they do it often. Case in point- Invincible and Thief of Thieves.

Both comics are fan favorites from out of the Image Comics stable. But while they do have fan followings, they don’t really get the kind of attention that the big superhero comics do, even though Invincible is such a book. Seeing this kind of fan attention from DST is always cool and this time out is certainly no exception.

Robert Kirkman’s other series (his first being The Walking Dead- have you heard of it?), Thief of Thieves will get little plastic representations of Redmond, Celia, Augustus and Agent Cohen. Both two-packs will be in stores next week for Thieves, but Invincible fans won’t have to wait quite as long as their favorite heroes will show up in stores tomorrow. As for the roster, the Invincible sets will include Invincible, Atom Eve, Omni-Man and Allen the Alien; so it’s a pretty great little cross-section of the bigger names from the book.

Jason's been knee deep in videogames since he was but a lad. Cutting his teeth on the pixely glory that was the Atari 2600, he's been hack'n'slashing and shoot'em'uping ever since. Mainly an FPS and action guy, Jason enjoys the occasional well crafted title from every genre.
@jason_tas
Previous Huge Seal Brings Steam Coupons And Free Games
Next Trio of huge Nintendo releases coming this Friday