Valiant Comics’ Fall mega-event book rolls on with more action than you can shake an alien suit of power armor at. 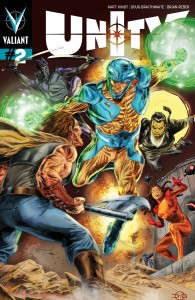 Broken but not beaten… Unity has to put down X-O Manowar and avert nuclear war. But Harada’s super-team lasted a grand total of five minutes last issue before they were taken out. Time for Unity 2.0…but how do you get a cast of malcontents, egotists, immortal warriors, and manipulative backstabbers to work together? The answer? You don’t tell them they’re working together.

Bringing together just about every heavyweight in the Valiant U for one massive book to rule them all, Unity has so far been nothing short of explosive. Now, heading into an all-out confrontation with the most powerful man on Earth, Unity had better put their game-faces on in a big, big way.

Also interesting to note with this book is that, while there are most definitely villains involved (Harada and possibly X-O himself), every character seems to have a side that you as a reader can easily identify with. Personally, I’m ‘rooting’ for X-O here and he’s really not acting much like the hero that he was in the fist year of the new Valiant. But I guess that’s what you get with a Visigoth prince; once a conqueror always a conqueror.

Unity #2 lands on the racks on December 11th form the creative team of Matt Kindt and Doug Braithwait. Don’t miss it. Seriously.

Jason's been knee deep in videogames since he was but a lad. Cutting his teeth on the pixely glory that was the Atari 2600, he's been hack'n'slashing and shoot'em'uping ever since. Mainly an FPS and action guy, Jason enjoys the occasional well crafted title from every genre.
@jason_tas
Previous Daedalic goes criminal for Blackguard dev diary
Next The Winter Soldier goes back to the Cold War this February