Deadworld returns to IDW with Restoration

Fresh from the War of the Dead event, the zombie gore-fest returns to comics with Deadworld: Restoration. 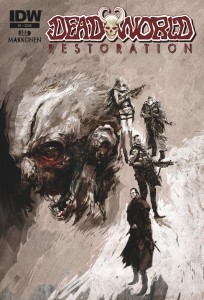 The lepers have been slaughtered, the people who escaped the breeder pits head for the safety of New Washington, and now the zombies are under the control of Donna, the half-human/half-zombie hybrid. With King Zombie dead, Donna is the leader of the zombies…or is she?

Restoration should make Deadworld fans smile too since it’s coming from the minds behind War of the Dead, which was certainly popular with fans of the unique undead universe. Original Deadworld writer Gary Reed and Sami Makkonen are both in for the book, which debuts this December. According to IDW, Reed is going to be going even darker with this new tale, if that’s even possible.

“I’m excited about this series,” said writer Gary Reed, “And the title of the series, Restoration, ties in with a number of different elements within the story. Yes, some things are restored but it’s not going to be what most people think.”

Look for the dead to start chomping again just in time for the Holidays as Deadworld: Restoration is set to hit stands in just two months from IDW.

Jason's been knee deep in videogames since he was but a lad. Cutting his teeth on the pixely glory that was the Atari 2600, he's been hack'n'slashing and shoot'em'uping ever since. Mainly an FPS and action guy, Jason enjoys the occasional well crafted title from every genre.
@jason_tas
Previous Memoria (PC) Review
Next PlayStation mobile App dated