Home / Featured Articles / Now Is The Future: Why Next-Gen is Current-Gen (Post-E3)

Now Is The Future: Why Next-Gen is Current-Gen (Post-E3)

So, my feelings about all of the E3 shenanigans is pretty apparent: I think MS was (mostly) unfairly pooped on by the general community of gamers, Sony got really sneaky and underhanded, and resorting to the aforemention pooping. Nintendo just washed their hands of it. The new tech on display was awesome. 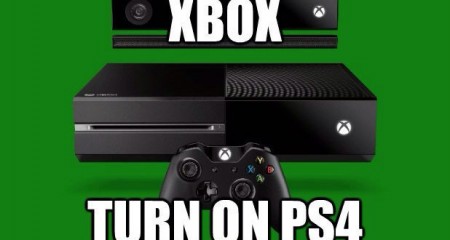 Now, I know that the whole DRM thing was a huge issue with gamers, and cries of “Xboner, go home!” and “PS4 already preordered! SONY WINS E3” was rampant. But I’d like to take a moment to point out something that console gamers just don’t seem toget: they’re perpetuating this struggle, this constant fighting and bickering over DRM and used games. Console gamers pirate like mad and deal in used games; the companies want to stem the hemorrhaging, so they add DRM and jack up the prices. Gamers get offended, and begin to pirate like mad and deal in used game, and the cycle just keeps repeating.

What Microsoft attempted to do was to begin the healing process, and bridge the gap between the success of PC DRM (think Steam, Origin, etc) and what currently exists. Sure, they did a piss-poor job of explaining it and delivering confidence in their move to gamers. But it was as step in the right direction. I say was because console gamers, in their infinite entitlement rage-wisdom, got all up in arms over constant connectivity, daily activation-drm, and so forth. I’m sure I’ll get flamed for being part of the pc master race (of course I am, duh), but honestly: if it’s worked for years on the PC, why can’t this beautiful ecosystem exist for console gamers? The answer is that console gamers feel so entitled that every action they take perpetuates the cycle of abuse. They invite it from the retail chains like Gamestop.

Console gamers, take a step back, and really just ponder: why is it that PC gamers don’t have a real option for used games, and yet they’re almost perfectly content (with exceptions like SimCity)? How is it that PC games are able to be sold for pennies on the dollar via Steam Sales, GMG, GOG, Desura, etc? Why is it that most PC gamers deal in “always-online” (ie having an internet connection in order to do just about anything), but don’t complain?

I grant you that consoles are a very different beast than PC. I get it. But technologically, treating consoles as PC’s for the purpose of game tech is an amazing leap forward. It’s an opportunity for something that isn’t possible on PC. Consoles with a constant connection have two things: a reliable set of system specs, and a constant connection. I’ll let you dream up the possibilities.

As a fledgling designer myself, it’s heartbreaking to see such interesting and innovative technology get stomped on. I don’t know about you, but I have lost so much interest in the next generation of consoles. They’re effectively Netflix boxes, where you pay for multiplayer, and have good graphics. There’s nothing unique, or interesting about these consoles now.

But you, the gaming masses, made it very clear: you want about decade or so of the same thing, but shinier and more hi-res. Enjoy it, I guess.

From the frigid wasteland of Canada, Dan has been writing since the early years, when a blank piece of parchment meant a whole world was waiting for him to discover it at the tip of his quill. Then he grew up and realized he could never be like Harry Potter, so he turned to video games instead. He's now a fledgling Game Designer, working hard to make his mark on the industry. In his off-hours, he likes to scorn people who like long walks on the beach. Too much sand.
Previous Hulk smashes things up in Hulk and the Agents of S.M.A.S.H.
Next Kaijudo Elite Series Triple Strike (TCG) Review