All of Sackboy’s LBP2 adventures in one place. 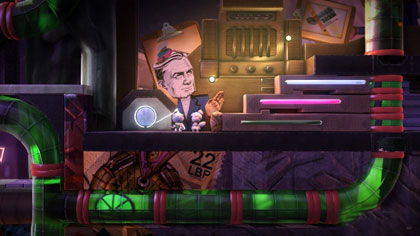 If you haven’t gotten around to playing LittleBigPlanet 2 yet, then you might be interested to know that a new version of the game is coming out sometime next month, complete with DLC extras.

The LittleBigPlanet 2: Extras Edition contains the game plus a whole slew of extra stuff: –

LittleBigPlanet 2 Move Pack: Rise of the Cakeling
Something evil is baking and only Sackboy can stop it using the Brain Crane and his new PlayStation Move-enabled powers.

The Muppets Premium Level Kit
Join Kermit, Miss Piggy, Gonzo and the rest of the Muppet gang to put on the ultimate Muppet Show for LittleBigPlanet… Just don’t let the mysterious theatre Phantom ruin the show for everyone. This adventure will have you running up walls trying to stop him, literally!

Costumes aplenty!
Whilst Sackboy travels across the Omniverse in LittleBigPlanet 2, you will come across a whole range of costumes for him to wear. On top of those included with the original release, the LittleBigPlanet 2 Extras Edition kits out Sackboy with the following bonus outfits:

Mike is Brutal Gamer's Indie Editor. He has been playing video games since the early 90s and is fond of racing games, puzzlers and MMOs. Typing /played while in WoW makes him cry, but not enough to stop him playing some more.
@Ognawk
Previous Abyss: the Wraiths of Eden (iOs) Review
Next CES13: Microsoft debuts IllumiRoom technology