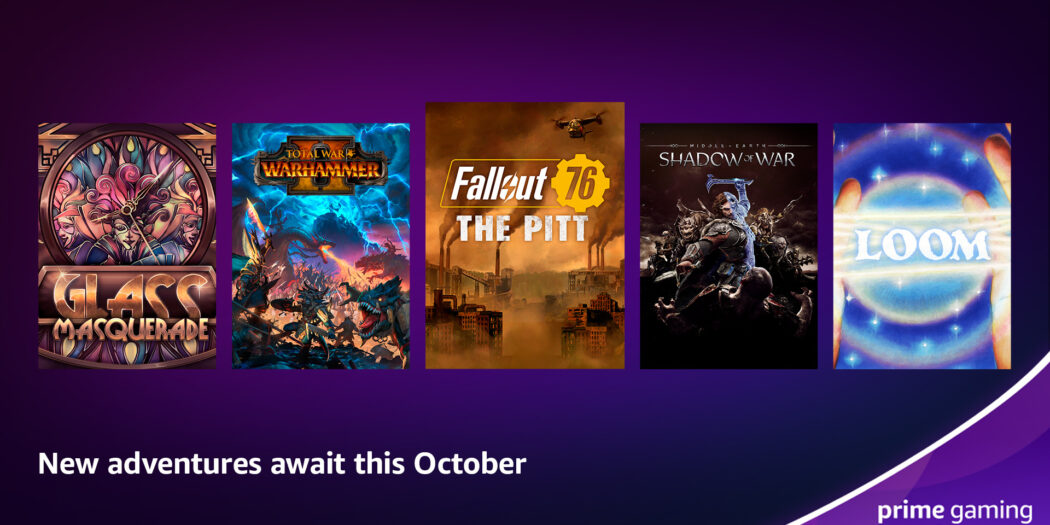 Yes it’s going to be a very nice month indeed for fantasy-minded PC gamers, with a pair of massive games hitting Amazon’s Prime Gaming. As mentioned, those include the open-world Lord of the Rings sequel Middle-earth: Shadow of War, and the real-time strategy title Total War: Warhammer II.

Both games have been hits with both critics and fans, and blockbusters in their own right. To get ’em both free of charge (if you’re a Prime Gaming subscriber) is pretty great. And of course, there’s a lot more coming.

October also sees the surprise addition of Fallout 76. Bethesda’s online, MMO(ish) post-apocalyptic game wasn’t all that well-received at launch, but has only gotten better (and better) the longer it’s been around. At this point, it’s pretty darn close to the Fallout title that fans actually wanted when it first hit, with NPCs to interact with and questing aplenty. Again though, that’s not all that Prime Gaming fans will get in October.

Adventure classic Loom is being presented again, along with the turn-based Hero’s Hour, puzzler Glass Masquerade: Origins, and the platformer Horace. Very nice month indeed there for PC players.

Coming to Luna (and don’t forget that DLC)

As usual too, Amazon’s streaming Luna platform will be rotating in a fresh assortment of titles. This month brings a terrific selection too, with SkateBird, Earthworm Jim 2, Star Wars Pinball, Monster Truck Championship, Metro Exodus and Blair Witch.

So it’s a nice selection of both newer and classic titles for fans of streaming. As odd as it might seem too, check out Monster Truck Championship, it just might surprise you.

On the DLC front too, there’s the usual monster-sized load. Scroll down to take a look at what’s coming and when.

Jason's been knee deep in videogames since he was but a lad. Cutting his teeth on the pixely glory that was the Atari 2600, he's been hack'n'slashing and shoot'em'uping ever since. Mainly an FPS and action guy, Jason enjoys the occasional well crafted title from every genre.
@jason_tas
Previous Trailer: CRPG’s return to consoles with Pathfinder: Wrath of the Righteous, out now
Next Trailer: Musical platformer 9 Years of Shadows re-dated for November