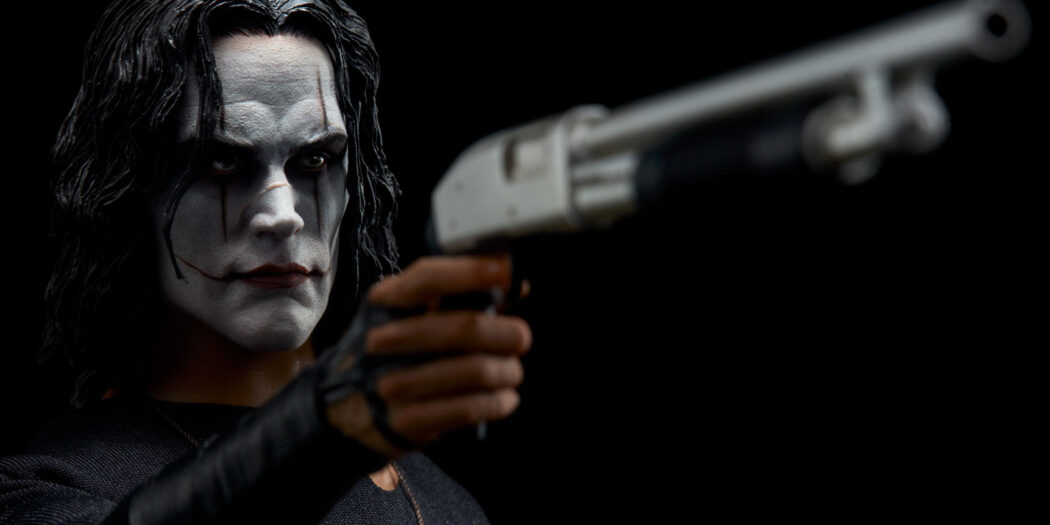 The Crow has been undergoing something of a renaissance as of late, and naturally Hot Toys might have the best figure yet with this upcoming release.

Victims… aren’t we all?

Dormant for a good long while, The Crow really is making a nice little comeback. While there’s no new marquee movie or comic out there, there have been quite a few figures and assorted collectibles hitting the market. That’s a list that includes Hot Toys latest.

A new premium, collector-level figure, Hot Toys’ take on the movie version of the dark hero is looking like a winner. The piece carries the usual attention to detail and top flight sculpting that Hot Toys is known for, including a spot-on sculpt of actor Brandon Lee.

Of course there are plenty of accessories too. The Crow sports a pistol, a revolver, a shotgun, a sword, and multiple sets of swap-out hands. You even get the one with the iconic bullet hole. And yes, there’s his crow guide too.

As with a good deal of these figures, there’s also a Sideshow Exclusive, which comes packing a guitar, complete with strap.

The Crow 1/6 Scale Figure features a detailed likeness of actor Brandon Lee as Eric Draven in The Crow. Resurrected and ready for retribution, he wears a meticulously tailored black fabric costume consisting of a torn trenchcoat, a long-sleeved shirt complete with movie-accurate bullet holes and wrapping, pants, and a necklace holding his fiancée’s ring close to his heart. Finished with a pair of sculpted boots, the undead antihero’s signature look captures the somber tragedy of that fateful Devil’s Night.

The Crow is expected to start shipping next month, with an October/November release window. You can still pre-order both versions however, via Hot Toys retailing partner Sideshow.

Jason's been knee deep in videogames since he was but a lad. Cutting his teeth on the pixely glory that was the Atari 2600, he's been hack'n'slashing and shoot'em'uping ever since. Mainly an FPS and action guy, Jason enjoys the occasional well crafted title from every genre.
@jason_tas
Previous Trailer: Rally is back, as WRC Generations hits pre-order
Next Trailer: CRPG’s return to consoles with Pathfinder: Wrath of the Righteous, out now