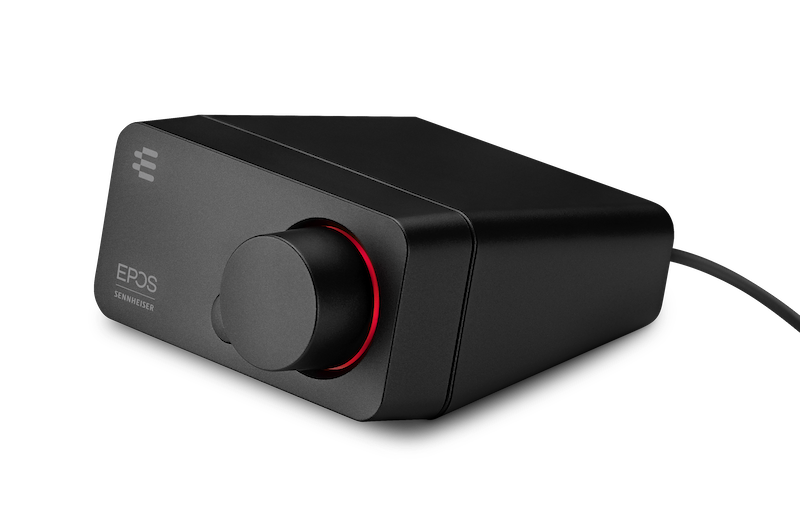 Sennheiser’s EPOS brand expands with a sharp little external sound card for your PC. The GSX 300 delivers 7.1 audio right through your headphones.

Is sound kind of a forgotten element in gaming? Maybe that was once true, as games didn’t have today’s soundtracks or full voice casts. But that’s all changed, and the hardware to carry that high quality to audiences has become even more important.

Stereo is great and all, but a deeper surround sound really can add a lot to the right game. That though, can be a tricky proposition for some players. After all, setting up a series of satellite speakers isn’t going to work for everyone, especially if you’re talking about a PC gaming setup. And I’ve personally had mixed results at best with sound bars.

That’s where something like an external sound card can come in handy. EPOS’ GSX 300 USB Sound Card is one such device, and it’s a pretty great option to add some dimension to your PC gaming life.

The GSX 300 is pretty easy to get going. It’s more or less plug and play, and all you really have to do is to have the software installed and plug the unit in. Once you do that, you’re ready to go in a few ways.

You have access to both 2.0 and 7.1 surround sound with the GSX 300, and you can even set up presets for different effects. The latter there is done in the software, with a physical control for activation.

As it goes though, it’s all around a simple deal to get running.

A tiny lil addition to your setup

One of the first things that you’re likely to notice about the GSX 300 isn’t the audio, but just how small it is. The box has a tinier footprint than most mobile phones, and is about triple the depth, though it is angled towards the rear.

On the face, you’ll find a small button and a chunky dial. The button switches between 2.0 and 7.1 surround sound, or a series of presets (that again, you can set via the software) while the dial is exactly what you think it is, and controls volume. It does have some snazzy lighting as well, with red, blue, and purple light effects depending on what you’re using.

As for the back of the unit, that features the USB and power, as well as the headset outs. And it’s with that, that I have a slight issue.

While the rest of the GSX 300 is thoughtfully made, I would have liked the headset port to have been on the front. I guess it would have interrupted the unit’s sleek lines, but it still would have been nice. As it is, you have to physically move the device if you want to unplug.

Before I get too much into this category, I do have to add what I was using the GSX 300 with. ‘Cause it does make a difference obviously. EPOS sent over a H6PRO Hybrid gaming headset to that end, and I can report that it’s fantastic.

Without getting too far outside the lines of this review, the H6PRO Hybrid has got a fold-away mic, earpiece-mounted volume control, and is both lightweight and comfy. It’s also offered in two flavors, with an ‘open’ ear-cup design and a closed one. The big difference being that the open cup will let air flow around your ears, and let you hear your surroundings easily while using it. On the flip, the closed version locks you away in your own world (for the most part). FYI: I tried the closed and loved it.

Okay, back to the GSX 300. The little box promises immersion, and it delivers. I tried the 7.1 option with a series of games, and it offered exactly what you’d expect, surround sound. It was easy to pick up enemies approaching from different angles, and other environmental noises. Some of that scared the heck out of me, since it isn’t something that I’m used to hearing with my system. As a little bit of a downer, I actually did have to turn the music down in some games, since it got a little loud. Just something to be aware of.

Are you looking for a great looking and affordable option, with some really nice surround sound? If you are, then you’ll definitely want to look at the EPOS GSX 300. While it does have some negatives, it’s a fantastic little piece of equipment that kicked my PC setup squarely in the pants, and has me regularly opting for my headphones instead of my speakers.

A GSX 300 unit was supplied by EPOS for this review

The GSX 300 from EPOS is an incredibly simple to use piece of external hardware. Taking up almost no space on a desktop, the digitally-processed 7.1 (or stereo) sound it kicks out delivers big time. If you're looking for something 'affordable' that'll offer solid surround sound to improve your gaming sessions, this just might fit the bill.

Jason's been knee deep in videogames since he was but a lad. Cutting his teeth on the pixely glory that was the Atari 2600, he's been hack'n'slashing and shoot'em'uping ever since. Mainly an FPS and action guy, Jason enjoys the occasional well crafted title from every genre.
@jason_tas
Previous Never before seen Mega Man Battle & Fighters hits the Switch
Next The classic returns. After 2 decades SNK’s Fatal Fury/Garou is back