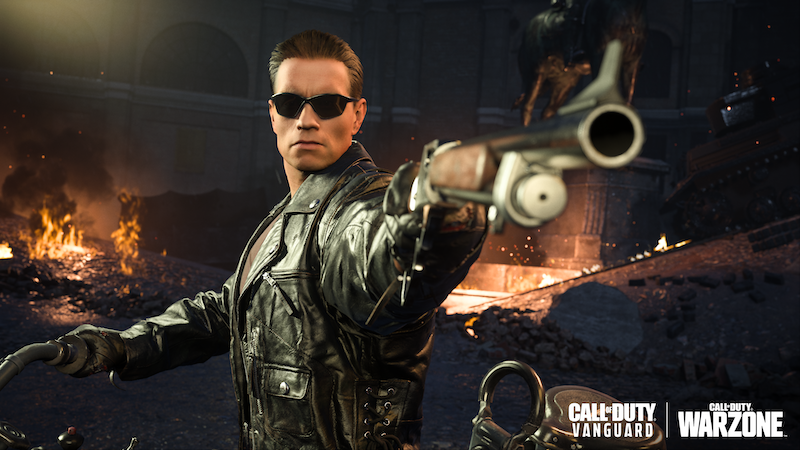 Home / News / Call of Duty: Vanguard and Warzone get Terminated in new update

Call of Duty: Vanguard and Warzone get Terminated in new update

He’s back. T2’s T-800 and T-1000 are on the way to Call of Duty as limited time operators, but Activision’s FPS is loading plenty more new content too.

Well here’s something that you don’t see all that often today, though I have to say it’s very welcome indeed. The Terminator 2 version of Arnold Schwarzenegger’s T-800 and Robert Patrick’s T-1000 are easily the most iconic characters from the Terminator franchise, and that’s exactly the pair that are coming to Call of Duty.

Thanks to a limited time Operator Bundle, the Terminators will be fully playable in the game. But while that’s pretty slick, it’s far from all that’s on the way to the game for next week’s mid-season rollout.

As part of this mid-season rollout, players can expect the Model T-800 and T-1000 Terminators to arrive from the future via Operator Bundles. There will also be “Titanium Trials: Endurance” in Caldera, the rise of Zombies in Rebirth of the Dead, a new Task Force Operator and more!

Along with all of the above, there’s also a little bonus action to talk up, for those who’ve pre-ordered Modern Warfare II. Those players instantly receive the Final Judgement Bundle. And included in that, is “the Legendary “Deathknell” Operator Skin and the Legendary “Bloodthirsty” Weapon Blueprint for use in Vanguard and Warzone”. Add in a bonus 1,500 COD Points, and you have a pretty nice incentive to pre-order.

As for the updates though, Vanguard’s will be out on July 26th, starting at 9am pacific, while Warzone’s will debut one day later. Click here for the full story, with a ton more details, right from the Call of Duty website.

Jason's been knee deep in videogames since he was but a lad. Cutting his teeth on the pixely glory that was the Atari 2600, he's been hack'n'slashing and shoot'em'uping ever since. Mainly an FPS and action guy, Jason enjoys the occasional well crafted title from every genre.
@jason_tas
Previous Claremont and Larroca return for more X-Treme X-Men
Next SDCC 22: Here’s your first look at season 3 of Star Trek: Picard