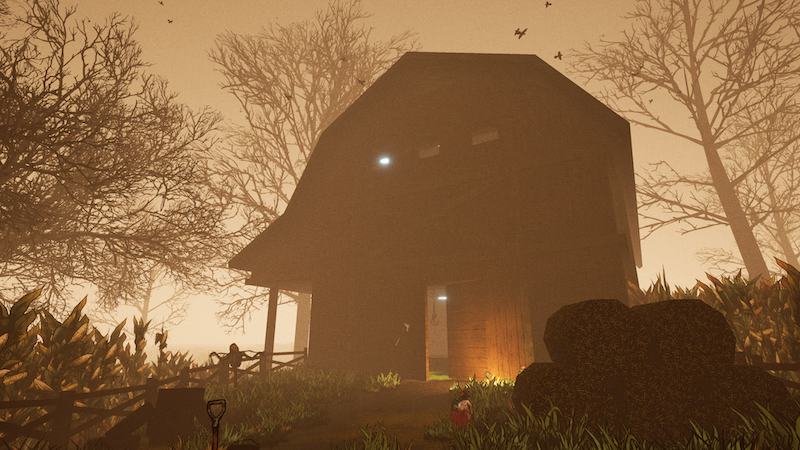 Steeped in Lovecraftian horror and featuring cosmic terrors aplenty, 1C and Byte Barrel’s Forgive Me Father is a solid retro-shooter with plenty of flair.

It seems like Lovecraft never really dies. I mean, as a theme (or… do I). Writer H.P. Lovecraft has influenced all manner of movies, TV, comics, and of course games in the decades since he created the likes of Cthulhu and the other demented ‘gods’ of his sinister pantheon.

It seems like his cosmic-terror universe is as popular as its ever been right now too. We just published a review of Lovecraft’s Untold Stories, and here we are with another title influenced by old H.P..

Aside from the man’s influence, Forgive Me Father is also a retro-shooter. It’s an FPS that takes many a cue from the genre as it was in the 90s, and if you’re at home with the likes of Doom and Duke Nukem 3D, you just might dig what developer Byte Barrel did here.

In Forgive Me Father you play as the only one left sane in a town that’s gone mad. Players get two choices, either the Priest or the Journalist, not that there’s that big of a difference between the two. And the setup is kind of besides the point anyway, as the fun begins when that character sets out to find his or her missing family member. It’s then that you find lunatics aren’t the only dangerous things out on the streets.

Actually, they’re the least of your problems, as zombies, monsters, and freaks of all sort stalk this waterlogged little corner of New England. Yes, that’s pretty typical in the realm of Lovecraftian games/movies/stories, though in this case it’s all a little more action-y than usual.

Also, while we’re talking about story here, remember that this is a retro-shooter. Sometimes it might not look like it, but Forgive Me Father is every bit that, and so it doesn’t exactly have the deepest of narratives behind it. Nevertheless though, it does offer quite a few tantalizing clues and story hints as you play. Those all add up to pretty typically “Lovecraft” stuff, but still, it’s there and fun to read through. That is, if you want to.

Story elements are often delivered by highlighting them in the environment with a literal word “Story” hovering above them. Interact with that and you get more story. Don’t and you… don’t.

While many modern shooters have added quite a bit in terms of gameplay that goes beyond the genre’s typicality, FMF stays rooted in its inspiration.

Running, jumping, and shooting is the meat and potatoes of Forgive Me Father, and the game gets the feel of a 90s FPS totally right. But while the main action is ‘classic’ in tone, Forgive Me Father does go a little bit further in the form of experience upgrades.

Those offer possible passive and active abilities for your character, as well as weapons upgrades. Very much of the active kind, the weapon upgrades are more like evolutions really, with some making the base gun feel like a forgotten relic.

Then there’s also the madness gage, but you knew that was coming. After all, this is a Lovecraft-inspired game, and lunacy is also part and parcel with the writer’s universe. Cosmic terrors trigger encroaching madness in all who witness them, though in a nice little twist, your character becomes more dangerous the crazier he/she gets.

Forgive Me Father is firmly retro in tone, and that extends to its looks just as much as its gameplay. You won’t find complex models present here, but you will find some wicked sprites.

Yes, enemies and objects in FMF are 2D elements in a 3D world. It’s a choice that works perfectly with the overall retro-aesthetic, and as mentioned some of them are incredibly unique. Where else will you find enemies that run the gamut from zombies and alien shock-trooper ‘Liquidators’, to blobs of moving tentacles and… Crab-Men.

It’s a wildly imaginative lot, and the group of them live in a world that’s just as weird and wild. Players will crusade through old mansions, harrowing rooftops, haunted swamps, and terror-filled farms.

But even though the graphics are simple in some ways, they’re also pretty well detailed. Levels don’t feel in any way sparse, and are filled with set pieces, little details, surprise attacks (that you may or may not get tired of) and secrets to uncover. On top of all that are the lighting effects, which are terrific. Though if I’m being honest, I should add that they do kinda/sorta break the ‘retro’ feel that I keep talking about.

On the flip side though, is most of the audio. The voice work, what there is of it, is quite good. Not that the main character says all that much, but he or she sounds good enough when they do. Unlike the music.

I found the music in Forgive Me Father to be, uh, not great. It’s kind of neither here nor there most of the time, and then kicks into high gear during big battles. Sounds good, I know, but it’s way too loud and over the top rock that felt out of place to me.

If you’re into classic FPS’, Lovecraft, or any mixture thereof, Forgive Me Father is a shooter you should probably check out. It hits a ton of high notes, and somehow manages to be firmly retro and offer new elements all at once.

Time to blast some squids

Forgive Me Father is a terrific little horror FPS. While it's grounded firmly in 90's era mechanics, it does offer a few modern bells and whistles and allows players to evolve their character and arsenal. While the music isn't the best, FMF looks sharp, offering detailed levels and enemies with some great special effects.

Jason's been knee deep in videogames since he was but a lad. Cutting his teeth on the pixely glory that was the Atari 2600, he's been hack'n'slashing and shoot'em'uping ever since. Mainly an FPS and action guy, Jason enjoys the occasional well crafted title from every genre.
@jason_tas
Previous Prime Gaming rolls into July ’22 with a monster catalog of PC gaming freebies
Next Evercade debuts new home computer line of carts with C64 Collection