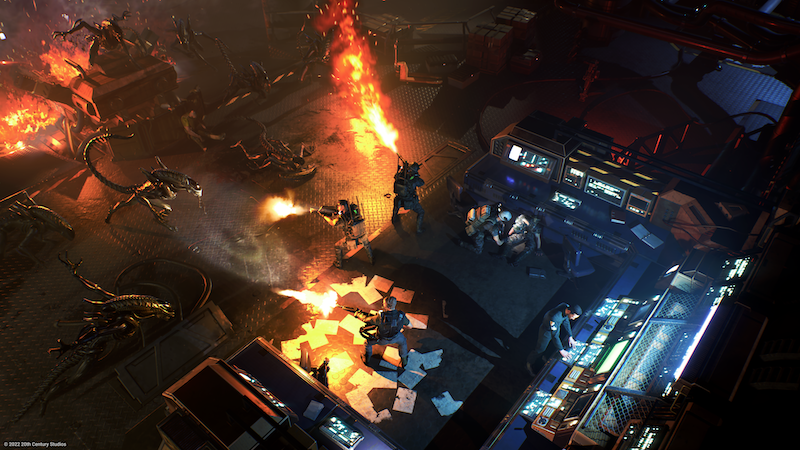 Here’s something a little different for Aliens. Focus and Tindalos are cooking up a top-down, squad-based shooter called Dark Descent.

Why is this latest Aliens title dubbed “Dark Descent”? Well, it’s pretty simple actually. Developer Tindalos is creating a game that will drive players deep into the hive of the deadly xenomorphs.

While that’s hardly advisable in any circumstance, it’s kind of a necessity here. The squad of marines that you’ll be playing as in this single player title are in desperate need of equipment to repair their ship. Those parts are in what’s now the hive of an Alien infestation. So yeah, not much of a choice there.

While we’ve seen somewhat similar plots in Aliens games, Dark Descent is presented pretty differently. That being in top-down style, and with tactical squad-based gameplay.

Explore the horrors and wonders of the Alien universe like never before, immersing yourself in a brand-new Alien storyline that introduces a new threat and a cast of new Marines to the iconic horror franchise. Uncover Lethe’s sinister secret, battle against an onslaught of iconic Xenomorph creatures and put an end to this new menace.

According to Focus Entertainment, Aliens: Dark Descent will have players building their team of marines with a pretty deep level of customization. The company promises an “extensive arsenal of weapons, armor, and special abilities”. And it sounds like you’ll need every bit of all of that, since the xenos will be able to change up and adapt their tactics in order to take your team down.

Players will need to employ tactical thinking in order to win here, including “sealing off checkpoints, unlocking shortcuts” and “creating safe zones”. Oh, and did I mention permadeath? Yeah, that too.

Aliens: Dark Descent is heading to the Xbox Series X|S, PS5, PS4, Xbox One, and PC. There’s no release date just yet, so stay tuned.

Jason's been knee deep in videogames since he was but a lad. Cutting his teeth on the pixely glory that was the Atari 2600, he's been hack'n'slashing and shoot'em'uping ever since. Mainly an FPS and action guy, Jason enjoys the occasional well crafted title from every genre.
@jason_tas
Previous Trailer: Sci-fi game Routine reemerges with fresh robo-terror
Next Nintendo Download: It’s Time to Strike!