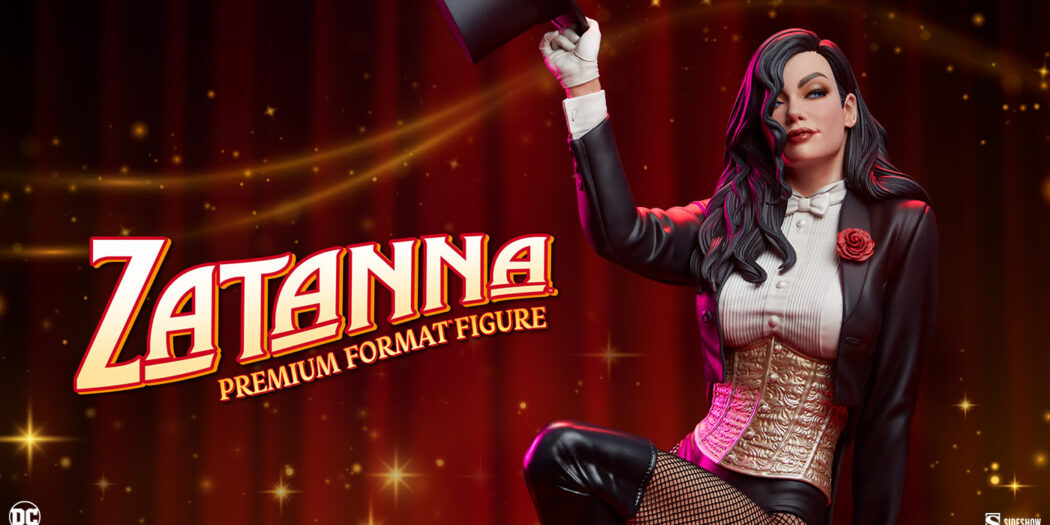 Statue collections just got a little more mystical, thanks to Sideshow’s newest. One of DC Comics’ greatest mages, Zatanna is on the way.

Far and away one of the key magic-wielders in the DC Universe, second generation conjurer Zatanna is a Justice League mainstay. She first debuted way back in 1964, and was a kind of sequel character.

Her dad Zatara came first, but he never achieved the kind of fan following that Zee did. And since her debut, she has appeared in countless comics, and multiple forms of media (still waiting on that movie WB).

And while it’s not the first, the latest statue to bear her likeness just might be the most impressive. Of course, that’s part and parcel with the name Sideshow, a company that’s known for highly detailed, high end collectibles.

The Zatanna Premium Format Figure features a mixed media costume with fabric fishnets and a sculpted magician’s outfit. Zee wears a spiffy black jacket over a white dress shirt and gloves, accented with a red flower on her lapel. A gold underbust corset adds a touch of sparkle to her show, complementing the gold starred tablecloth in her trick. With a black top hat in hand and thigh-high black boots completing her look, Zatanna Zatara smirks knowingly at the crowd as she mesmerizes onlookers with her magic abilities.

As you can see above, the Sideshow Exclusive Edition of Zatanna comes with an extra display option too. You can swap out her top hat, for one that’s loaded with Fuseli, Lord of Nightmares. That’ll add a little extra creep-factor to the mistress of the mystic arts.

Zatanna is set to ship out in the winter/spring 2023 time frame, and is up for pre-order now at Sideshow’s online shop. She’s priced in at $600 USD.

Jason's been knee deep in videogames since he was but a lad. Cutting his teeth on the pixely glory that was the Atari 2600, he's been hack'n'slashing and shoot'em'uping ever since. Mainly an FPS and action guy, Jason enjoys the occasional well crafted title from every genre.
@jason_tas
Previous Video: Countdown to (more than) marketing with Devolver Digital
Next Sideshow unboxes Hot Toys’ Iron Man 2 Mark V armor