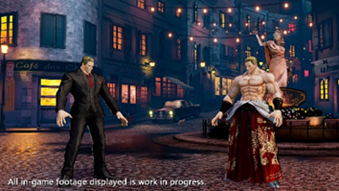 A trio of bad-boys are on their way to SNK’s latest King of Fighters title. The fighting game welcomes in Team South Town this week.

The boys are back in town

Rolling right along is King of Fighters XV, SNK’s latest fighting extravaganza. KoF XV reenergizes the series with new looks and a revamped fighting system. And that’s in addition to a star-studded roster of combatants.

Since it’s launched too, SNK has kicked off a robust post-launch plan, which adds even more. We’ve already seen Team Garou, as well as Omega Rugal, and now the latest arrives with Team South Town.

GEESE HOWARD
Geese Howard is the overseer of the Howard Connection and a supreme power behind the scenes in South Town. He is well versed in ancient Japanese martial arts and specializes in countering opponents’ attacks with devastating throws. He exudes an overwhelming presence as a charismatic figure of evil.

BILLY KANE
Billy Kane is a dedicated loyalist to Geese Howard and is second-in-command in the Howard Connection. He fights with an extending staff that has an impressive reach to keep his opponents at bay. Billy is known also as the ‘walking deadly weapon’ due to his hot-blooded personality.

RYUJI YAMAZAKI
Ryuji is a lone outlaw who made a name for himself as a broker in the underground. He is also one of Orochi’s Eight Hakkesshu, but he lives only for his own gain. In this tournament, he seems to have been hired by the Howard Connection for a certain purpose, though as to what that could be is anyone’s guess.

In addition to the above trio, the new pack also includes some nifty extras. That comes in the form of an extra costume for each new character, plus some new balancing for the game in general.

Look for all of the above on May 17th, for all versions of KoF XV.

Jason's been knee deep in videogames since he was but a lad. Cutting his teeth on the pixely glory that was the Atari 2600, he's been hack'n'slashing and shoot'em'uping ever since. Mainly an FPS and action guy, Jason enjoys the occasional well crafted title from every genre.
@jason_tas
Previous New oversized Harrow County book collects 2 volumes
Next Hot Toys conjures a Multiverse of Madness for new Doctor Strange