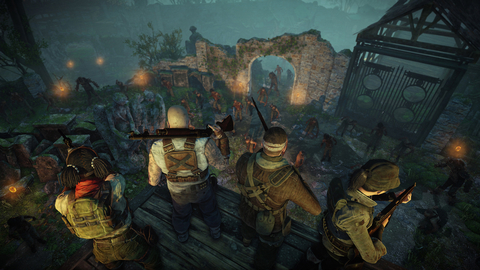 It’s a busy indie-loaded week for Nintendo Switch gamers, with some larger launches like The Stanley Parable and Zombie Army 4: Dead War thrown in.

One big title arrives for the Switch this week with Zombie Army 4: Dead War. The Rebellion-made title sets players against a horde of the undead in the final days of WWII, and looks pretty terrific doing it.

If your tastes are a little more sedate though, there’s also The Stanley Parable: Ultra Deluxe. This new revision of the long-lived PC game delivers all of the original launch’s content, plus some new inclusions to shake things up.

While those are the larger scale releases though, there is an absolute ton of smaller indie stuff hitting. I can’t say I’m familiar with really any of those games, but they’re there nonetheless and you never know. There just might be a few gems to discover.

*** Gold Points are awarded based on the amount you pay (excluding tax and any points or discounts used) and have no cash value. A Nintendo Account is required to receive and redeem My Nintendo points. Terms apply. https://accounts.nintendo.com/term_point.

Jason's been knee deep in videogames since he was but a lad. Cutting his teeth on the pixely glory that was the Atari 2600, he's been hack'n'slashing and shoot'em'uping ever since. Mainly an FPS and action guy, Jason enjoys the occasional well crafted title from every genre.
@jason_tas
Previous The modern Shadowrun is getting an updated Trilogy pack for consoles
Next Trailer: The neon-dead arrive in Warhammer 40K: Battlesector with Necron DLC