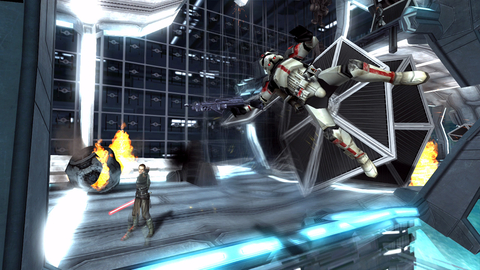 The N64 gets an update in this week’s Nintendo Download, thanks to the arrival off Mario Golf. Don’t like golf? How about a little Force Unleashed?

Golfing in a galaxy far, far away

Okay so technically they’re not directly linked, but Star Wars golf does sound like something that might’ve hit a few white boards back in the late 80s/early 90s. I could see it, is all I’m saying. But though this week’s bigger releases on the Switch aren’t thematically related, they do share one thing. And that, is that they’re both re-releases.

First up, Mario Golf hails from the N64’s heyday, seeing original launch in 1999. While it’s not one of the Italian plumber’s main sporting-activities, it remains a favorite of that console’s devotees. And it’s now a part of the N64 corner of the Switch’s “Expansion Pack”, online subscription service.

Then there’s Star Wars: The Force Unleashed. Also a re-release, this new Switch title brings the Wii version back to life, placing players in the shoes of Starkiller.

If you don’t know who that is, he’s one of the most interesting Expanded Universe characters in the fiction, a secret apprentice of Darth Vader himself. I haven’t played the Wii edition, but the Xbox version had excellent controls, and terrific graphics (for the time). Maybe most importantly though, the story is genuinely good. If you’re a SW fan and haven’t played it, it’s probably still worth your time.

Jason's been knee deep in videogames since he was but a lad. Cutting his teeth on the pixely glory that was the Atari 2600, he's been hack'n'slashing and shoot'em'uping ever since. Mainly an FPS and action guy, Jason enjoys the occasional well crafted title from every genre.
@jason_tas
Previous Robosen follows up on ‘Auto-Converting’ Optimus Prime with his trailer (and Roller)
Next New Halo collection coming up from Dark Horse