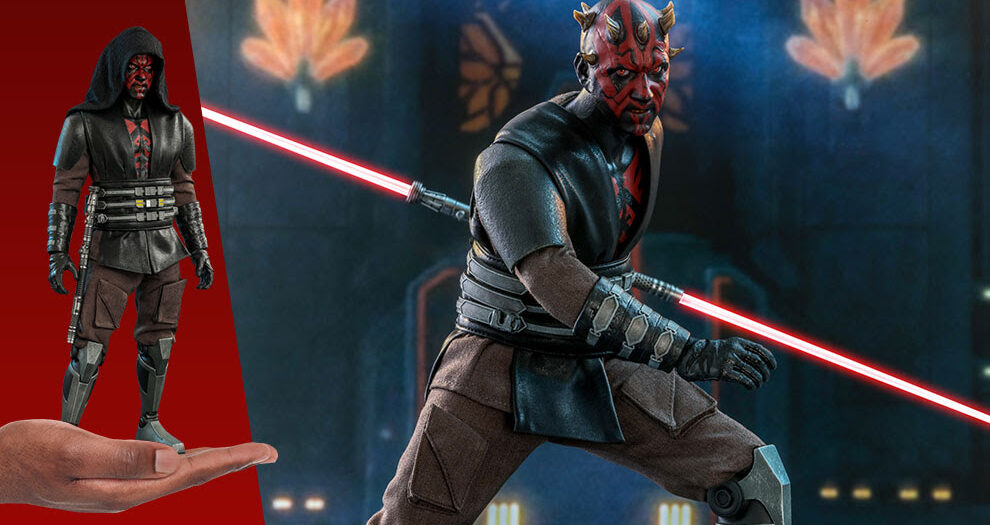 One of the coolest parts of the Clone Wars animated series, the reborn Darth Maul makes the leap to Hot Toys’ high-end collector line of figures.

The story of Maul, as depicted in the (canon) Clone Wars series is kind of a sad one. Yes, he’s twisted and evil, but he’s also half machine, and has been cast aside by the Emperor. In the show, he wants nothing more than vengeance.

It’s a quest that never comes to fruition either. Maul plans the siege of Mandalore for the sole reason of luring Anakin Skywalker to his doom, and taking him away from the rising Darth Sidious. Of course, that doesn’t come to pass, as it’s Ahsoka instead that arrives to do battle with him.

It’s this version of Maul too, that gets the grand treatment as a part of Hot Toys lineup. The half-cyborg villain is cast in the usual 12th scale, with plenty of detailing and accessories included.

Priced at $250 USD, Darth Maul is set to ship very soon. He’ll be out some time from this month through May.

The new Darth Maul 1/6 Scale Figure is skillfully crafted and meticulously detailed, featuring a newly developed, hand-painted head sculpt with a stunning likeness to Darth Maul, and a unique separate rolling eyeballs system — allowing collectors to adjust the figure’s gaze when posing him for display.

The Darth Maul 1/6 Scale Figure is outfitted with a finely tailored costume, and comes equipped with highly detailed mechanical legs, Maul’s iconic double-bladed lightsaber, and interchangeable lightsaber blades emulating the weapon in motion. Accessories include a selection of interchangeable hands for posing options, and a specially designed Mandalorian™ sarcophagus-inspired box.

Jason's been knee deep in videogames since he was but a lad. Cutting his teeth on the pixely glory that was the Atari 2600, he's been hack'n'slashing and shoot'em'uping ever since. Mainly an FPS and action guy, Jason enjoys the occasional well crafted title from every genre.
@jason_tas
Previous Trailer: Rebellion showcases Sniper Elite 5’s marksmanship
Next Trailer: Decisions, decisions. They all matter in Devolver Digital’s Weird West