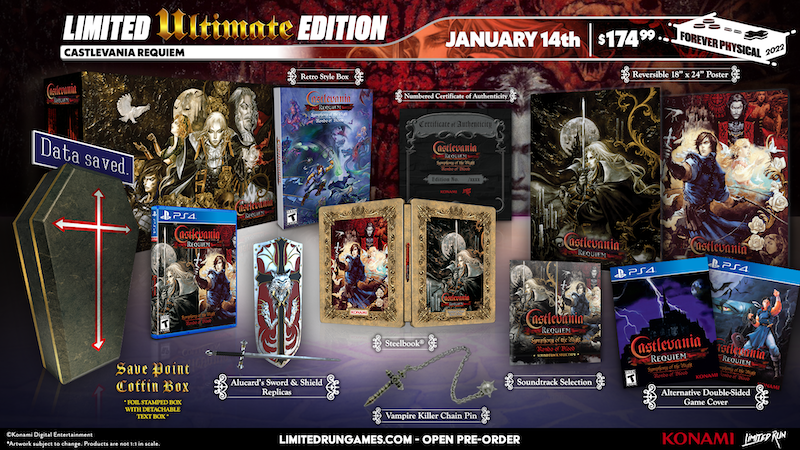 Released digitally on the PS4, Castlevania Requiem is about to put a stake through disc-based libraries, thanks to Limited Run Games.

Requiem for a series

There sure has been a lot of Castlevania as of late. Well, there has been for a series that’s not had a new title since part 2 of the Lords of Shadow reboot (in 2014) anyway. The long-running horror series from Konami has nonetheless produced a few collected editions in the last few years.

Classic console editions, handheld versions, and the (kinda-sorta) 2-parter that was Rondo of Blood and Symphony of the Night, have all been bundled. Til now, these have been all digital affairs, though that last one is about to make the jump to physical.

Castlevania Requiem includes both Rondo and Symphony, and will get a physical disc from Limited Run Games. The pre-order period will kick off this week, on January 14th, 2022. And if you know anything about LRG, then you know that the pack won’t likely become available anywhere else afterwards.

There will also be 3 separate editions to choose from, including the base edition, which will be priced in at $34.99 USD. Aside from that though, there’s a Classic Edition, and a gigantic Ultimate Edition that includes a “save point” coffin box and lots more.

Here’s what’s included in each of the big-boxes:

Jason's been knee deep in videogames since he was but a lad. Cutting his teeth on the pixely glory that was the Atari 2600, he's been hack'n'slashing and shoot'em'uping ever since. Mainly an FPS and action guy, Jason enjoys the occasional well crafted title from every genre.
@jason_tas
Previous PS+ adds Deep Rock Galactic, Persona 5, and Dirt 5
Next Thor #24 celebrates the god of thunder’s 750th issue