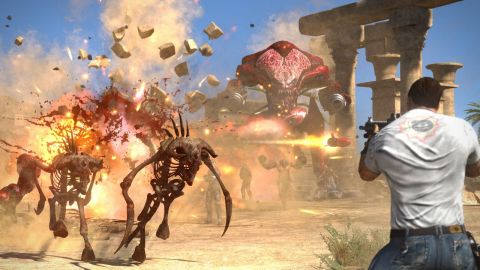 Available for a while on last-gen consoles and the PC, Serious Sam 4 is back and ready to take it to Mental’s menagerie on the Xbox Series X|S and PS5.

And by “serious”, I mean not serous at all. After all, this is Sam Stone we’re talking about here, and the only thing that’s serious is the amount of enemies on screen at once.

Serious Sam 4 originally debuted last year for the PC, as well as the PS4 and Xbox One. Since then, it’s appeared on the Switch as well, but hadn’t yet gotten the boost up to modern set-tops.

Well that’s been seen to, as of today. Devolver Digital and Croteam’s 4th over-the-top Sam adventure is finally available for the Xbox Series X|S and PS5.

Humanity is under siege as the full force of Mental’s hordes spreads across the world, ravaging what remains of a broken and beaten civilization. The last remaining resistance to the invasion is the Earth Defense Force led by the ever-dependable blue-collar grunt Sam “Serious” Stone and his heavily-armed squad of misfit commandos.

If you’d like to check out our review of the PC edition of this beast, click here.

Jason's been knee deep in videogames since he was but a lad. Cutting his teeth on the pixely glory that was the Atari 2600, he's been hack'n'slashing and shoot'em'uping ever since. Mainly an FPS and action guy, Jason enjoys the occasional well crafted title from every genre.
@jason_tas
Previous Trailer: Into the Starfield kicks off look behind Bethesda’s latest epic
Next Clid the Snail sliding on to PC this month