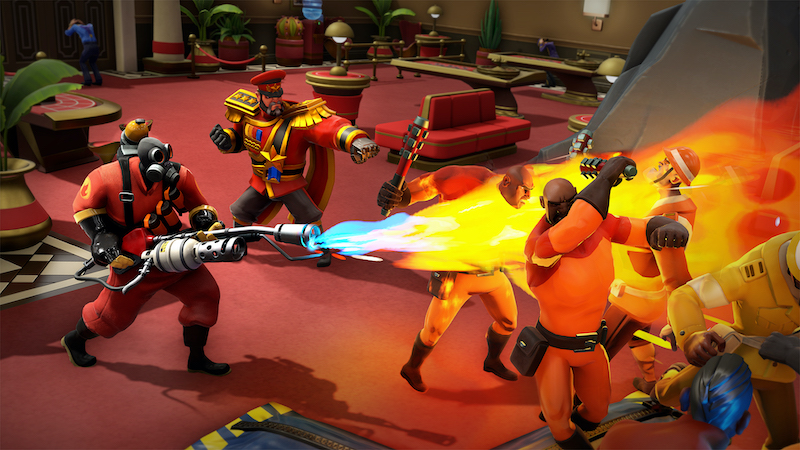 Rebellion’s Evil Genius 2 gets an updating this week with a pair of new DLC packs, one of which brings Team Fortress 2’s Pyro as a henchman.

What self-respecting Evil Genius can resist harnessing such destructive power?

Recruit the Pyro as a Henchman and increase your firepower… literally! Pyro can indiscriminately engulf their surroundings in an inferno, fan the flames on those tiresome Agents in the aftermath, and even extinguish less friendly fires with a puff of compressed air.

It’s time to unleash the Valkyrie’s voice! When the Evil Genius decimates the plans of a rising star in the Opera world, you better believe she’s going to seek sonic vengeance. Your minions will need to best this devastating prima donna and her powerful friends, in a saga of shattering performances that will test their nerves, eardrums, and glassware.

Doomhilda’s destructive voice is legendary, possessing the power to stop her enemies in their path – or even inspire her allies to victory. Can the Evil Genius convince Doomhilda to join their side as a Henchman, or will this woman with the voice of an ‘angel’ see them facing the final curtain call?

Jason's been knee deep in videogames since he was but a lad. Cutting his teeth on the pixely glory that was the Atari 2600, he's been hack'n'slashing and shoot'em'uping ever since. Mainly an FPS and action guy, Jason enjoys the occasional well crafted title from every genre.
@jason_tas
Previous Microprose’s action/strategy title Highfleet gets July 27th launch
Next Trailer: Nickelodeon All-Star Brawl rings the bell this fall