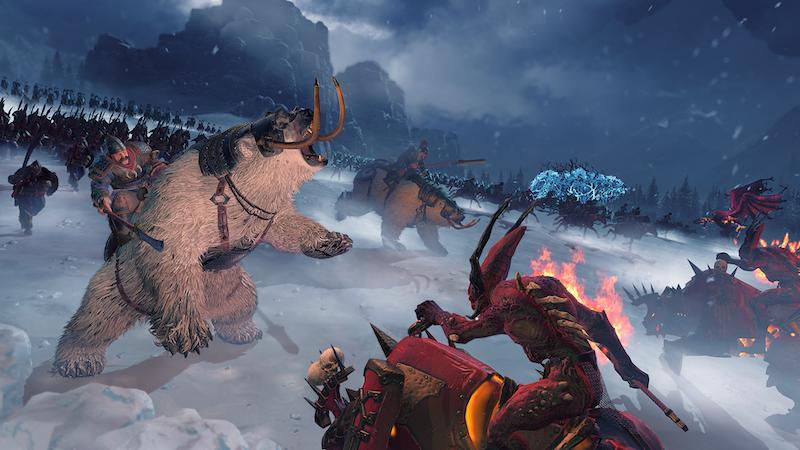 Our first look at Total War: Warhammer III takes the action to the frigid north. Daemons meet the hardened warriors of Kislev.

Billed as the northernmost kingdom of humanity in Warhammer’s Olde World, Kislev is a cold place in every way. Not only is the snow and ice plentiful, but the people are equally as tough. That’ll be put to the test though, as Total War’s newest Warhammer-fueled outing will pit Kislev against the daemonic hordes of Chaos.

It’s a good thing then, that the Kislevites are stocked with elemental beasts, ice witches, and bear… cavalry.

Tzarina Katarin Bokha, the Ice Queen of Kislev, is one of the most powerful Ice Witches to have ever lived. Alongside her innate magical prowess, she relies upon proficient hand-to-hand combat skills that are elevated by her magical sword, Frostfang, which can fell even mighty beasts with a single blow.

“You feel her aura before you see her. You breathe clouds, there’s a stinging chill in the air, and then she arrives, compassionate… regal… beautiful…. deadly.” – Boyar Drulz

Kislev won’t be the only race to see action in Total War: Warhammer III. They’re just the first to get a deeper look. From here, the game will introduce factions and races like Khorne, Nurgle, Tzeentch, Slaanesh, Cathay, and more.

Stay tuned for those, as lots more is coming up between now and the game’s release on the PC.

Jason's been knee deep in videogames since he was but a lad. Cutting his teeth on the pixely glory that was the Atari 2600, he's been hack'n'slashing and shoot'em'uping ever since. Mainly an FPS and action guy, Jason enjoys the occasional well crafted title from every genre.
@jason_tas
Previous Batman and Superman returning to animation on HBO Max and Cartoon Network
Next Loki joins DST’s Marvel Select line at Disney Stores