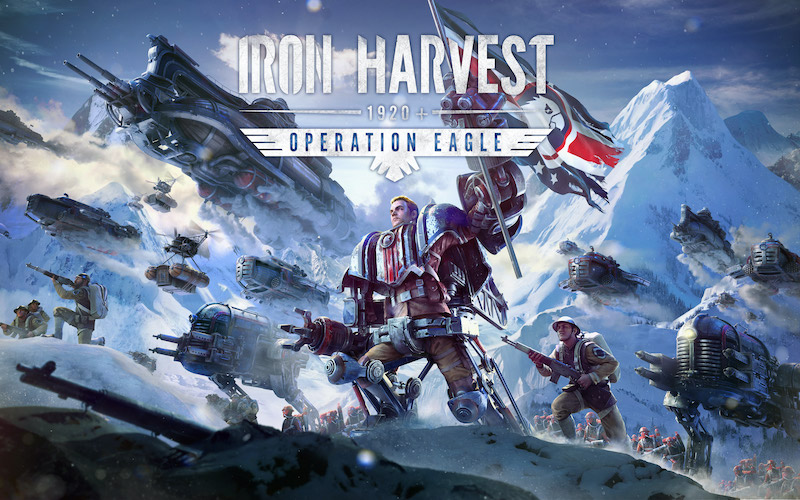 In the alternate universe of Iron Harvest, diesel-powered mechs stalk the battlefields of post WWI Europe. But where’s America in all of this?

World War I is in the rear-view mirror. Europe’s state of peace though, is short lived as the old factions of the old world are never fully satisfied. But they forgot about one thing: America.

This isn’t the America that you know from any era though. In Iron Harvest’s universe, America never got involved in WWI. Instead, the country isolated itself, and slowly built itself into a powerhouse for the ages.

That’s the stage that real-time strategy title Iron Harvest sets for it’s standalone downloadable content titled Operation Eagle. In it, the American Union of Usonia arrives on the scene, and with the nation’s mighty Diesel Birds, they’re going to be a force to be reckoned with.

The American Union of Usonia stayed out of World War I and became an economic and military powerhouse, unnoticed by Europe’s old elites. Relying heavily on their “Diesel Birds,” the Usonia faction brings American might to the Iron Harvest battlefield.

So yes, there’s a lot to this content. And if you need convincing of that, note that Operation Eagle includes an entirely new campaign centered on the Americans, as well as 20 new units and new multiplayer maps. You’ll also find airborne units for not just the Union, but all other in-game factions too.

Add to that a trio of new heroes, and a “secret faction” that’ll play ally to your forces, and you have what’s essentially a brand new experience. That’s probably why this is standalone, meaning you don’t have to have a copy of the main game to play Operation Eagle. Well, you don’t if you’re playing on Steam anyway.

Operation Eagle though, is available via not just Valve’s platform, but also GOG and Epic. The expansion arrives on May 27th, and will be priced in at $19.99 USD.

Want to check out our review of the base game? Click here for that.

Jason's been knee deep in videogames since he was but a lad. Cutting his teeth on the pixely glory that was the Atari 2600, he's been hack'n'slashing and shoot'em'uping ever since. Mainly an FPS and action guy, Jason enjoys the occasional well crafted title from every genre.
@jason_tas
Previous Take a first look at Warhammer Age of Sigmar: Storm Ground’s gameplay
Next Insight Editions holds May the 4th Star Wars sale, headlined by new popup book