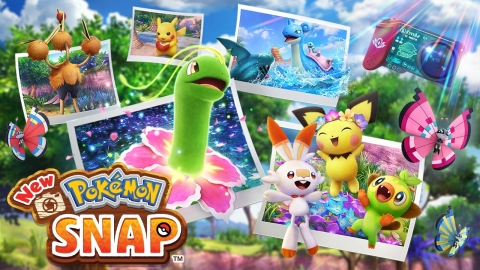 Home / News / Nintendo Download: Get Into the Pokémon Frame of Mind

Nintendo Download: Get Into the Pokémon Frame of Mind

Snap! And just like that, there’s a new Pokemon game out for the Nintendo Switch. This one once again tasks gamers with building their photog skills.

I want pictures of Pikachu!

It’s actually kind of a big week in the making for Switch gamers. I suppose that a game with “Pokemon” in the title automatically takes the spotlight though. Even if it is a game outside of the core series Pokemon.

New Pokemon Snap is definitely that, as it’s the latest title in the “Snap” series of (basically) photography games. NPS gives you a camera, and sets you to task with finding and snapping pics of wild Pokemon. No, you don’t add them to your collection to do battle, you just show ’em off in their natural habitat. Such as it is.

As mentioned though, there’s some other pretty notable stuff hitting too. Chief among those games is R-Type Final 2 (the first R-Type in almost 20 years), and the “Legacy” update for Apex Legends. A couple of potential stars there.

Jason's been knee deep in videogames since he was but a lad. Cutting his teeth on the pixely glory that was the Atari 2600, he's been hack'n'slashing and shoot'em'uping ever since. Mainly an FPS and action guy, Jason enjoys the occasional well crafted title from every genre.
@jason_tas
Previous Hot Toys unveils new MCU Sam Wilson Cap figure
Next Trailer: Sky-high action highlights latest look at Hot Wheels Unleashed