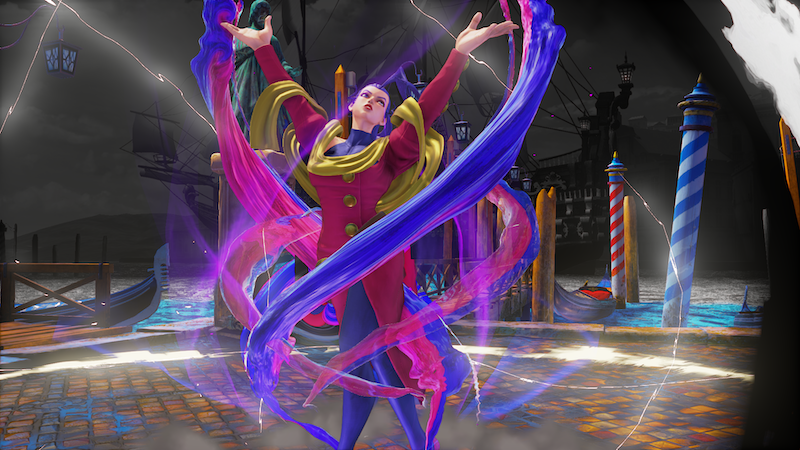 Another new fighter has made her way to Street Fighter V, as a part of the game’s fifth season of content. This time it’s SF Alpha’s Rose.

Street Fighter V just keeps on chuggin’. Once the object of mass. derision from fans, Capcom just kept on pushing with the fighting game, adding and adding to it. As a result, here in the fifth season of content, and the age of the “Champion Edition”, SFV has finally come into its own. Worthy of the Street Fighter moniker? I’d say so.

Rose here is the second of five new fighters. Fellow Alpha-alum Dan was added back in February, and the next two will be Ori and Akira. The fifth? That’s still a mystery. But be that as it may, the fortune-telling Rose is here today, and she’s got some soul-power to unleash on SFV’s roster.

Here’s a look at her in action:

With her latest iteration, Rose comes equipped with powerful moves that longtime Street Fighterfans are sure to recognize. Her “Soul Satellite” makes its return from Street Fighter IV as a V-Skill, allowing Rose to summon orbs and put pressure on her opponents. Her “Soul Illusion” from the Street Fighter Alpha series comes back as a V-Trigger which creates a mirrored Rose that performs the same attack shortly after she does, inflicting heavy damage.

Rose also wields a brand new set of moves such as her “Soul Fortune” V-Skill, allowing her to draw one of four tarot cards to buff herself or debuff her opponents. This new skill unlocks a new dimension of gameplay for Rose players, who can now decide when to play offensively or defend themselves depending on the tide of battle. “Soul Dimension” is Rose’s new V-Trigger move which she can use to teleport to one of three spots on the screen to offer expanded combo options.

Ready to add Rose to your copy of SFV? She’s a part of both the Season 5 Character Pass and Premium Pass, and can also be bought separately for $5.99 USD. Rather pay with in-game currency? She’s priced in at 100k in Street Fighter “Fight Money”. Likewise her stage, the Marina of Fortune, can be had for $3.99 USD or 70,000 in Fight Money.

Kind of a cool note on the stage too, is that it’s designed to resemble her Street Fighter Alpha 2 setting. Neat little throwback detail there.

Jason's been knee deep in videogames since he was but a lad. Cutting his teeth on the pixely glory that was the Atari 2600, he's been hack'n'slashing and shoot'em'uping ever since. Mainly an FPS and action guy, Jason enjoys the occasional well crafted title from every genre.
@jason_tas
Previous Season 3 of Call of Duty: Black Ops Cold War arrives this week
Next Dark Horse’s original Halo book to get reissue