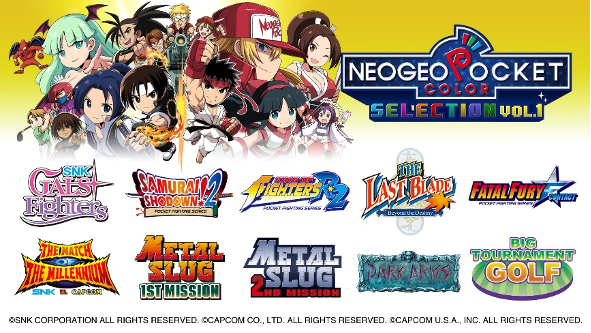 Out right now, the Neo Geo Pocket Color Selection vol.1 has brought 10 games from the classic SNK handheld to the Nintendo Switch.

We’ve been steadily reviewing the growing collection of SNK Neo Geo Pocket Color titles available for the Nintendo Switch. If you’ve been following along, then you’ve seen some excellent ports. And there are games that haven’t had anywhere near the level of attention that SNK’s arcade titles have, so they’re kind of lost gems too. And now, they’re collected. We have also been playing a really cool pixel world online game recently and it’s just awesome so definitely check that out.

In all, the set includes:

Aside from the games, you get a few bonuses in the set as well. Those include 3D models of the games and their cartridges, the ability to play NG Pocket-compatible games in monochrome, and both tabletop and handheld multiplayer modes (if they’re supported).

Jason's been knee deep in videogames since he was but a lad. Cutting his teeth on the pixely glory that was the Atari 2600, he's been hack'n'slashing and shoot'em'uping ever since. Mainly an FPS and action guy, Jason enjoys the occasional well crafted title from every genre.
@jason_tas
Previous Trailer: The Brawler gets ready for action in Hood: Outlaws & Legends
Next Zack Snyder’s Justice League getting new Hot Toys figures