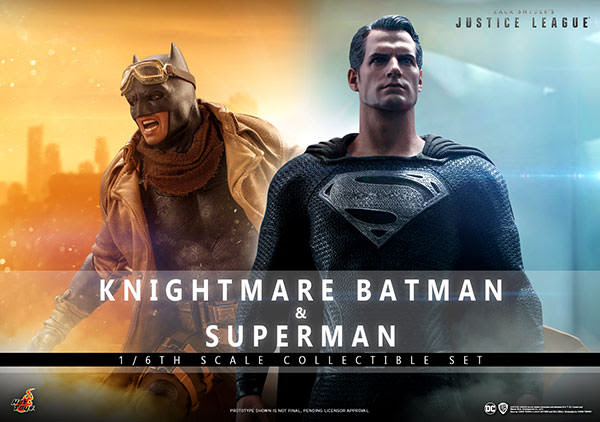 It’s one of the biggest events in film for 2021. And if you thought the Justice League redux wasn’t going to get some cool merch, you were wrong.

Justice League has a long and winding road to get to the point where it became what original director Zack Snyder had originally envisioned. It’s definitely there now though, with a 4 hour cut of the film making a splash on HBO Max.

As big as this re-envisioning of the movie is, you’d best believe there’d be some merchandise on the way. High-end collectible and toy-maker Hot Toys has that covered, with some amazing looking figures.

While there may be more on the way, it’s the World’s Finest that will be leading off. That includes figures of the post-apocalyptic “Knightmare” Batman and Superman in his black, regeneration suit.

Both figures are cast in the 1:6th scale, and feature over 30 points of articulation. Oh, and it’s a 2-pack. That’s right, these aren’t separate releases. One mighty box set, carried by Hot Toys retailing partner Sideshow Toys, will include both Superman and Batman.

Yes, that means it’ll be a pricy set, and will feature a tag of $515 USD. If you want to check it out for yourself, or pre-order one, click here. The set if scheduled to ship out in the 3rd quarter of 2022.

Jason's been knee deep in videogames since he was but a lad. Cutting his teeth on the pixely glory that was the Atari 2600, he's been hack'n'slashing and shoot'em'uping ever since. Mainly an FPS and action guy, Jason enjoys the occasional well crafted title from every genre.
@jason_tas
Previous Neo Geo Pocket Color Selection brings a 10 pack of games to Switch
Next King of Fighters 15 reveals team Fatal Fury