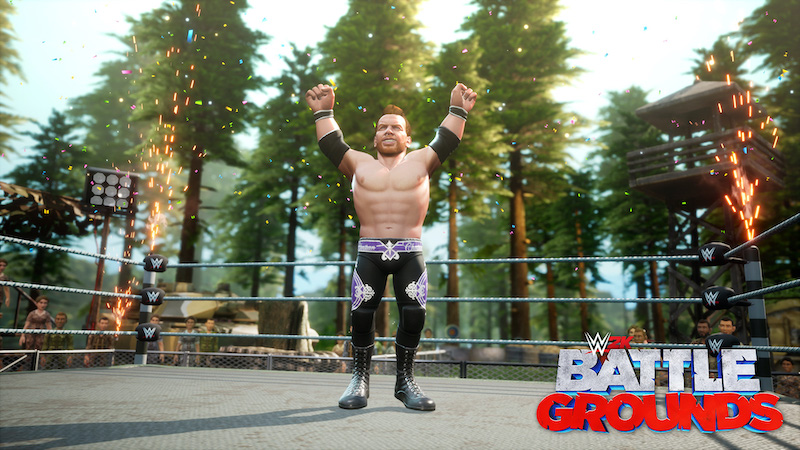 There might not have been a sim WWE wrestling game released in 2020, but you have to tip your cap to its stand-in. The fast-paced, arcade action title WWE Battlegrounds has been rocking and rolling with post-launch content. And all of it is free for owners of the base title.

The latest pack, launched last week, included a trio of new wrestlers as well as a new arena. Included was:

But wait, ’cause there’s more. Saber Interactive and 2K’s battler has another round of DLC prepped for… tomorrow. February 3rd will bring:

There are a few things before you go back to the game to play. For starters, this isn’t “DLC” in the strictest meaning of the term. Technically, even though this is all downloadable content, it’s coming as part of an update. Hence the ‘free’ status.

Also, if you’ve played the game then you know that most of the roster needs unlocking. You do that by playing through the campaign. And unless you see “(unlocked)” next to the new addition above, that’s the route you’ll have to take with these new characters and arena. Nevertheless, it’s tough to argue with free content that’s this regularly delivered.

WWE Battlegrounds is available right now for the Xbox One, PS4, Switch, PC, and Google Stadia. You can check out our review of the Xbox One version right here.

Jason's been knee deep in videogames since he was but a lad. Cutting his teeth on the pixely glory that was the Atari 2600, he's been hack'n'slashing and shoot'em'uping ever since. Mainly an FPS and action guy, Jason enjoys the occasional well crafted title from every genre.
@jason_tas
Previous GameBoy RPG Dragonborne coming to PC this month
Next Trailer: Season 3.5 of Fall Guys tumbling around now